Most Southampton fans, of my age at least, will cite Matt Le Tissier as their favourite player. Those who are a bit older may say Mick Channon, or maybe even Terry Paine, Ron Davies, Alan Ball or Kevin Keegan. I’m not sure who the kids go for nowadays. And let us not even get started on the long list of Saints players who have left for pastures new and gone on to stardom.

Le Tiss is, of course, a god to the Southampton faithful but I’m very clear in my mind who my favourite Saint is. It’s Rickie Lambert, who this week announced his retirement.

Lambert joined Saints at the start of the 2009/2010 season for a fee in the region of £1 million. He was the first big signing under the new Markus Liebherr ownership. Alan Pardew handed him Matt’s cherished no.7 shirt. At the time that raised a few eyebrows, but the lad certainly arrived with some pedigree behind him. Lambert had been prolific in Leagues 1 and 2, scoring 59 goals in three seasons for Bristol Rovers.

Lambert’s was a proper striker’s striker who was never happier than when he was charging into the box to direct a low drive into the corner or soaring above the defence to plant a header. His free kicks were pretty special, too. Saying that, he had a trick or two on the ball, and his first touch was superb as well. And although you didn’t often see it, he had a bit of pace about him when it was needed. As a striker, I’d argue, he was pretty much the perfect package, and not entirely dissimilar to his Saints predecessor Alan Shearer.

In his first season for Saints he netted an astonishing 36 times, although this was just short of helping the club overturn the 10-point penalty it incurred from slipping into administration to gain promotion. Saints finished seventh, and seven points behind the play-off spots. However, Lambert’s 21 goals the following season were the catalyst for promotion. At the time the big question was whether he could replicate that form at Championship level. The answer? 31 goals (with his 27 League goals making him the division’s top scorer that year) and promotion to the Premier League at the first time of asking.

Again, Lambert faced critical uncertainty, with pundits queuing up to assure everyone that the Premier League was a very different beast to the lower levels, and that Lambert might struggle to assert himself. But assert himself he did. He arrived on the pitch for Southampton’s season opener against Manchester City at the Etihad on the 55-minute mark. He scored in the 59th minute, four minutes into his Premier League debut, and at the ripe old age of 30. He went on to score 15 goals that season, and was the joint top scoring English player (alongside Frank Lampard) in the top flight.

He scored 14 goals the following season, too. Sadly, that heralded the end of his five-year long relationship with the club. Saints were at the time not shy of selling their top stars, but Rickie’s departure was not about money. It was about love. Liverpool, the team he had always supported, came knocking (as they have since developed a fondness for). And with heavy heart Rickie knew it was a chance he couldn’t refuse. The club realised this too, and granted their hero the dream move he had rightfully earned.

But in age where Saints players routinely strike for their right to head up to Merseyside, Lambert’s departure was entirely different.

“Southampton have allowed me to realise a lifelong ambition by joining Liverpool FC and taking my family home,” he wrote in an open letter to Saints fans at the time of his departure.

“When I grew up there was only one club I loved. I can honestly say now I have two clubs which will always be in my heart and that is thanks to the Saints fans. The people who support this club have been nothing short of amazing towards me and, when I look back in years to come, it will be the relationship I had with the fans here which will stand out the most.” 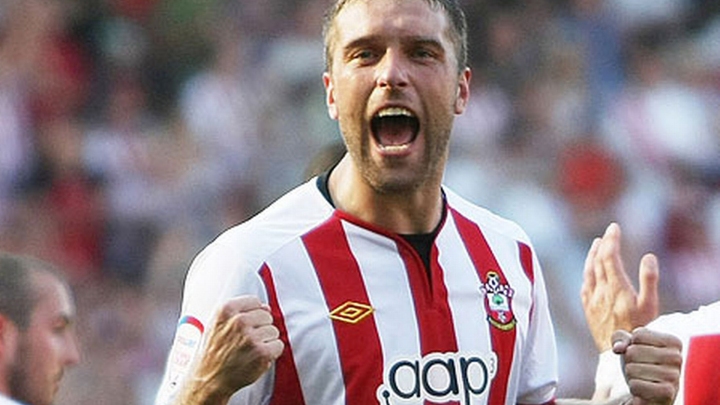 Lambert retires as one of very few players to have scored in all four of England’s League divisions. He scored on his Premier League debut. He scored on his England debut, too, netting with his first touch of the ball against Scotland, of all teams, to claim a 3-2 win. He received his first international call-up, incidentally, on the same day his wife gave birth to their third child.

He scored 117 times for Southampton, and claimed the elusive 100% penalty record that even the mighty Le Tissier couldn’t achieve, thanks to that infamous save from Mark Crossley. In fact, Lambert is the top English League goal scorer this century. 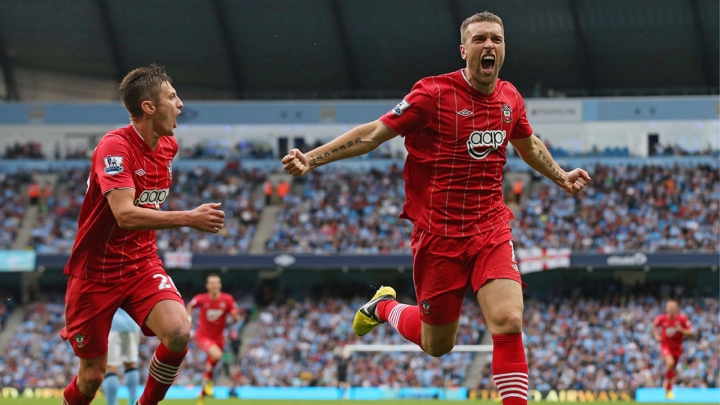 And even now, at the end, having seen his Liverpool dream fall flat and having suffered little success at West Brom or Cardiff, Lambert is still reaching out to his devoted Southampton faithful.

“I have had some ups and downs in my career but to have represented clubs like Southampton, Liverpool and playing for my country in a World Cup were beyond my wildest dreams,” he said in his retirement statement.

“Playing and scoring for England is probably my proudest professional moment and I will look back at every aspect of how I got there with fond memories.

“I would like to thank the fans of all of the clubs I played for but especially at Southampton where I enjoyed my best years as a footballer and had a special relationship with everyone connected to the club.”

Make no mistake about it, Lambert can claim just as much credit as the Liebherr family for helping Saints recover from the dark days of relegation and administration. There is no brighter beacon that so ably represents the remarkable strides the club has taken to recover and re-establish itself. It is entirely likely that we will never again see a player enjoy such prolific success across three tiers of the English game with one club, let alone do it with the decency and professionalism that Lambert embodies. Rickie will forever be remembered as a St Mary’s hero and a man who stepped up to face every single challenge his journey with the club threw at him.

Genuinely, they don’t make them like this anymore. Thank you, Rickie.