I’m going to come straight out of the gate here and confess that I don’t much care for Beast Wars.

I’m not saying it’s bad. I’ve tried to watch it a couple of times but have never been able to get past how ugly it is. It’s kinda like Dora the Explorer. Dora’s not a bad show, but I could barely tolerate my little one watching it because every aspect of the visual design made my soul itch. In The Night Garden, on the other hand, is some sexy shit. Lovely trees, well kept grass, and Makka Pakka is a total dude. Nickelodeon’s Ninja Turtles? Beautiful. Adventure Time? Glorious, in every way. 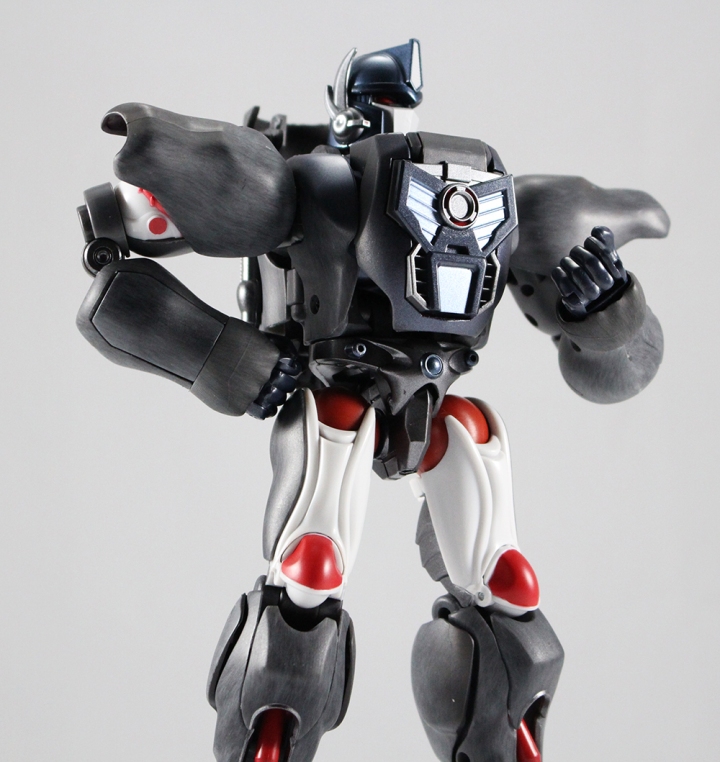 I know lots of folk who really love Beast Wars and reckon it has the best narrative of all the Transformers cartoons, and I’ve no reason to doubt them. I’m sure it’s great, even if the mere concept of transforming into animals strikes me as totally absurd. Robots turning into cars and jets and trucks? Yep, I’m digging it. Cassette players and guns? Yeah, if you like. I’m even down with changing into ROBOTIC animals like the Dinobots. Who’s not loving a big metal T-Rex? Robots turning into hairy gorillas and wasps and shit? Eh? 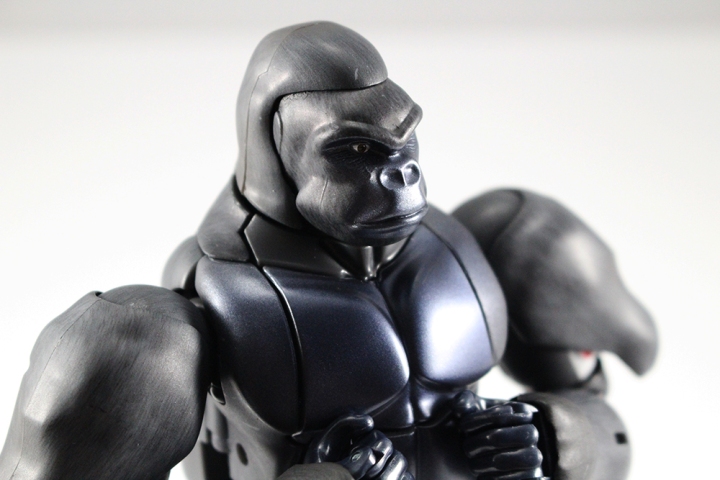 All of which meant I didn’t have Masterpiece Optimus Primal on pre-order. But, as is the way with these things, once my retailer of choice had him in stock and folks in my feed were posting pics and bigging him up, I of course crumbled. 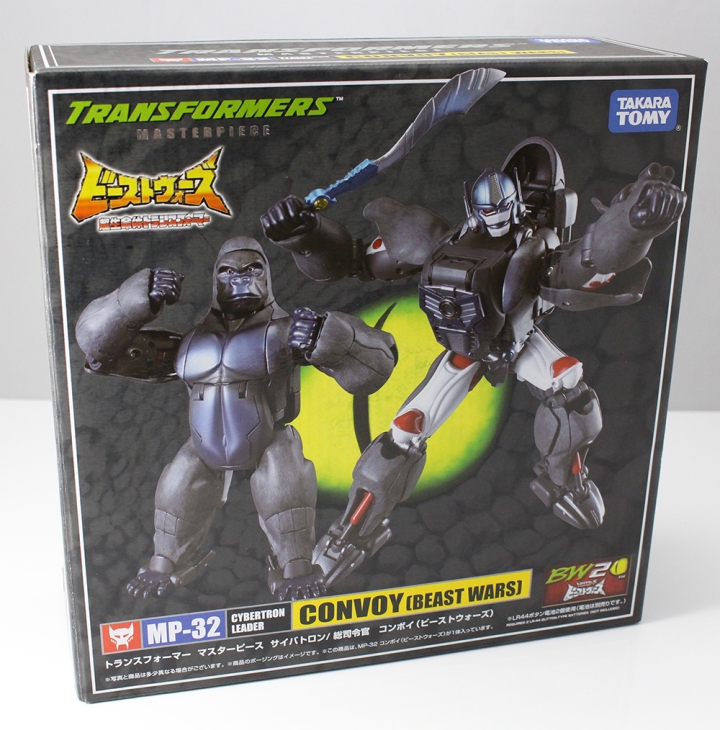 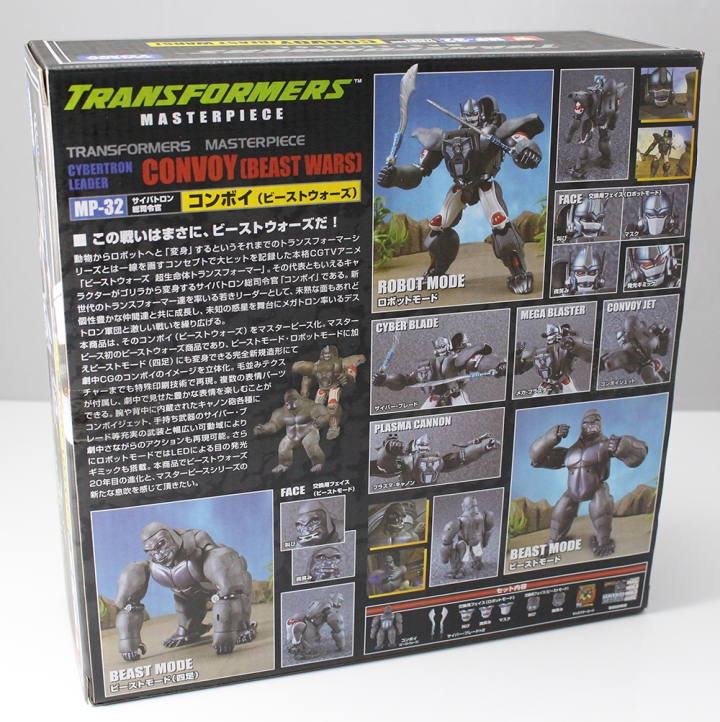 Getting him in hand I was immediately struck by just how small he is. Perhaps I’ve been spoiled by the gradual size increase 3P Masterpieces have been gravitating towards, but this guy feel tiny. About £60 tiny, in fact. Certainly not £90 tiny. Just this morning I ordered a Titans Returns Fortress Maximus from Tesco for £100. About fifty times more figure for a tenner more. Primal stands less than an inch taller than my current deskbot, RiD Scorponok. And he costs £12.99 in Sainsbury’s.

Not that it’s not all about size. It’s also about engineering. Primal’s animalistic alt of course means he feels different to others MPs in hand, but it’s clear he’s a quality bit of kit. Nice ratchets, good joints, lovely hidden weapon mechanism – he ticks all those boxes.

Speaking of boxes, inside Primal’s you’ll find three spare bot faces and two alternative gorilla faces. Personally I can’t tolerate anything other than the standard clean Optimus faceplate option, but the others are certainly authentic, and it must be said surprisingly similar to one another. I do love the gorilla faces, though. They’re really playful and feel ideal for what cannot help but be a be bit of a comedy alt mode. He’s a fucking gorilla! A big, gurning gorilla! I really do enjoy it very much.

Some orders also come with a metal mace in a frankly glorious cardboard banana box. Nice touch, that.

This mode has a couple of different configurations. You can have a walking about for a PG Tips ad standing up mode, or alternatively a skulking about with Sigourney in the mist hunched mode. Both look great and are a pleasure to dabble with, although it’s not without its quirks. Why, exactly, do the upper arm panels not close fully over the arms? It seems deliberate and I can’t fathom why it would be designed like this. I guess it harks back to the toy, but even then this was surely just a design limitation as it’s not present in the show. You might find that the head, too, will pop off from time to time. Not a big problem, but something worth mentioning regardless. 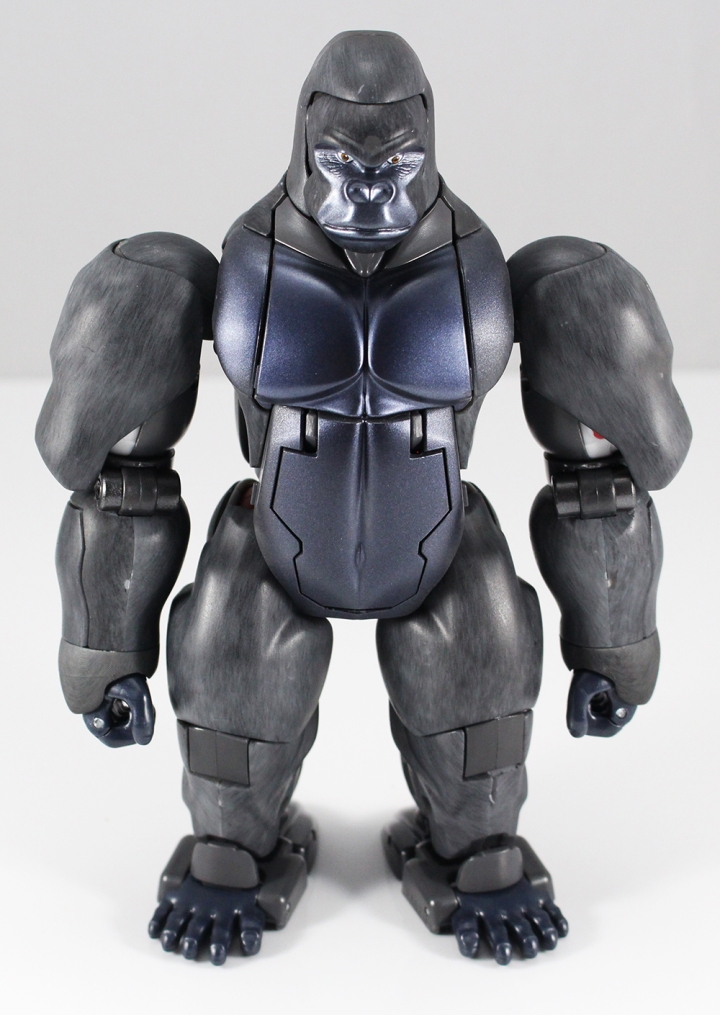 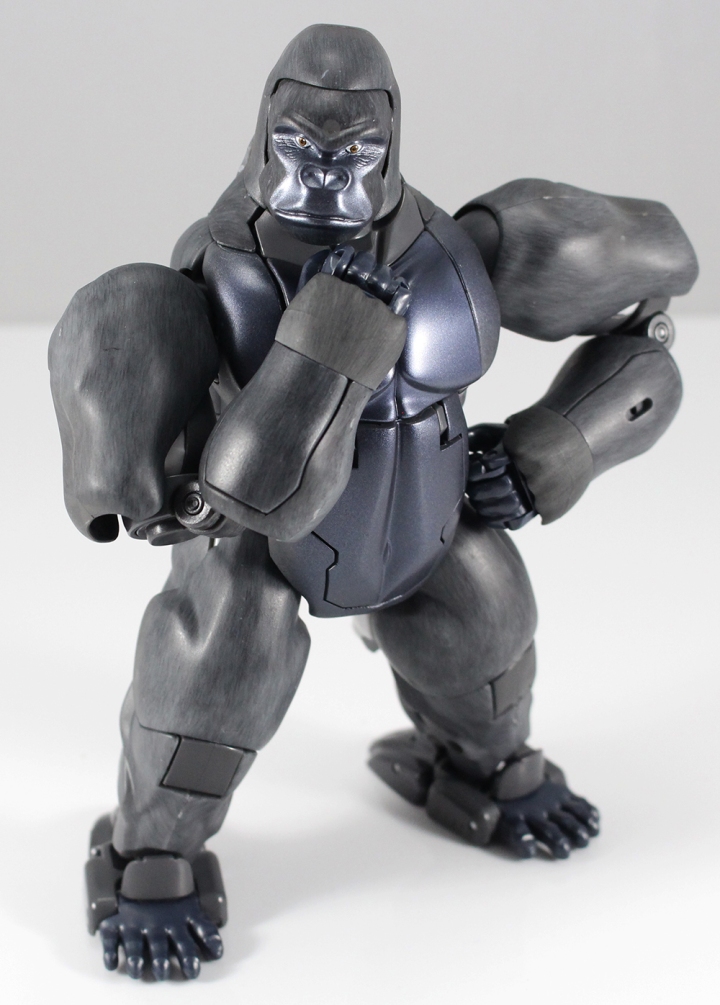 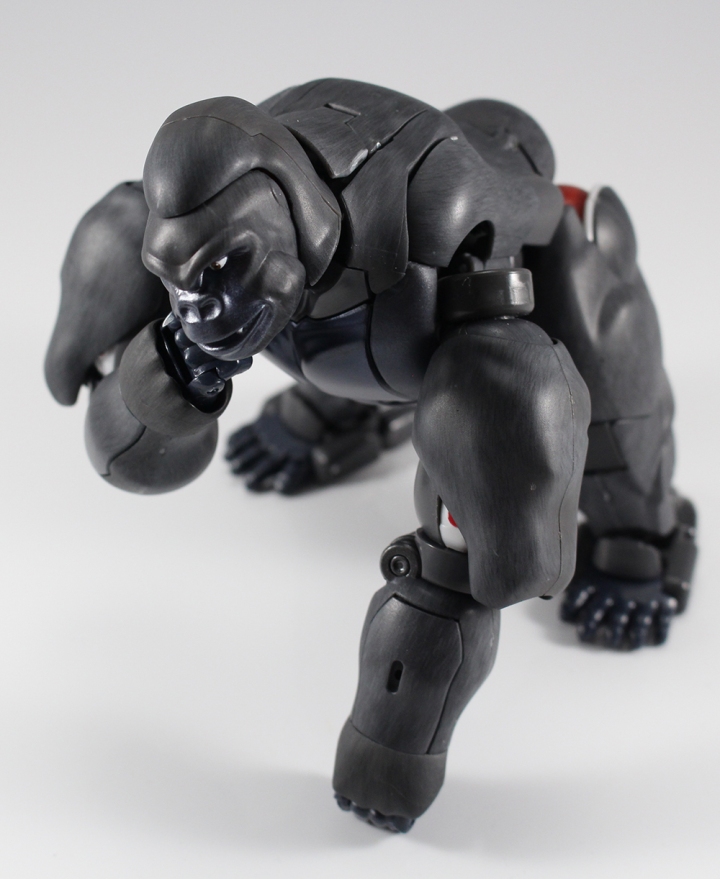 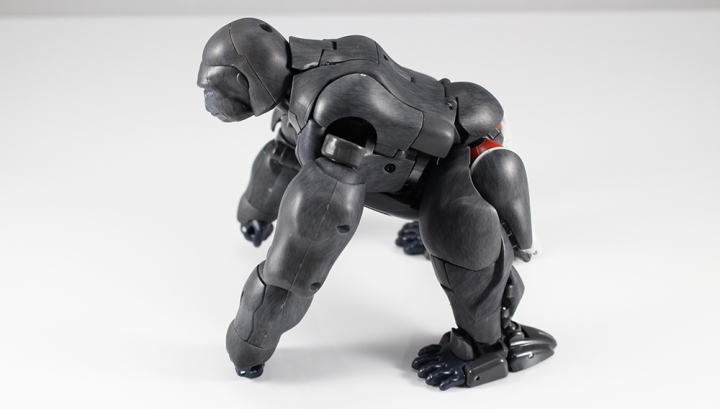 In truth, I maybe prefer his gorilla mode to the robot. In bot mode Primal is very faithful to both the show and the original toy, so it’s hard to fault him in that respect. Those thighs are proper odd, though, and their sculpting means that natural leg positioning feels harder to achieve then it should be. Some folk might take exception to how the elbows work (in both modes). It’s true that full bend leaves a big hinged gap, but I think it’s a price worth paying for the good articulation. Ankle tilt, ratchets and decent bend are all present and correct. 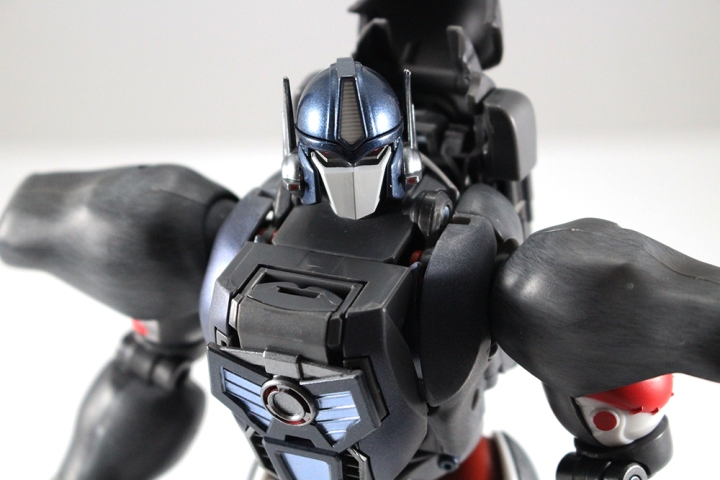 There are some great touches, too. I love the hidden guns that pop up from the forearms, and the way they can be teased out of their housing thanks to a small and very discreet button on the underside. Also cool are the optional shoulder cannons and the working pistons at the ankle. 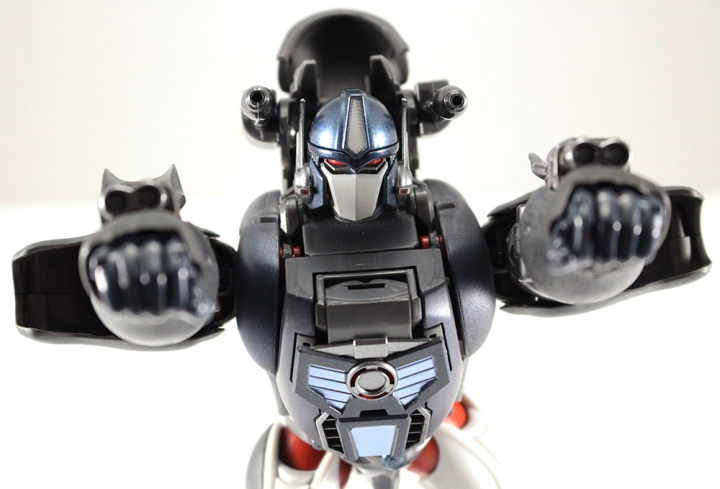 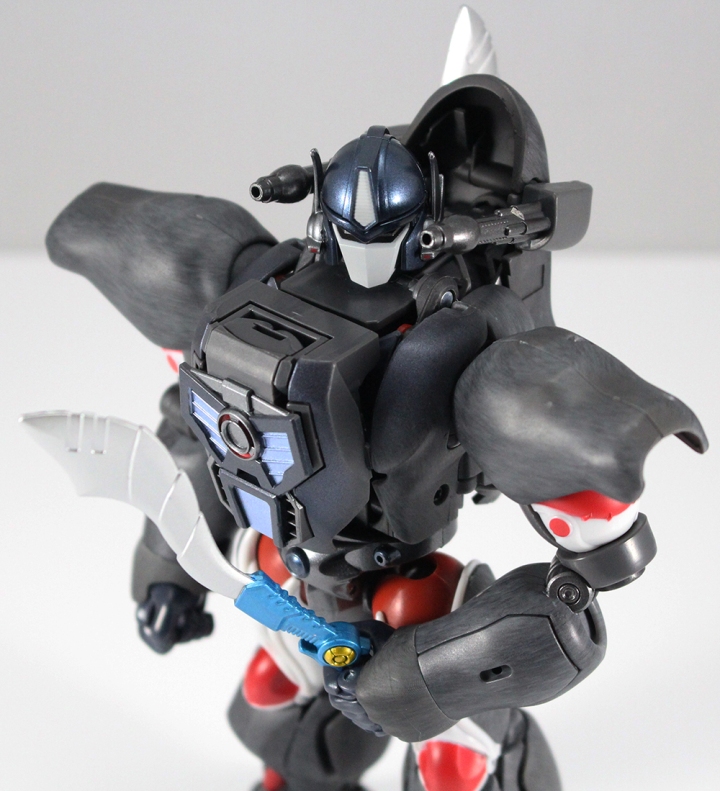 It should be noted, too, that I enjoyed the transformation a lot. Have the instructions at hand the first time so you can get a grip on what panels go where and the swivel points, but once you’ve done it once it’ll seem completely natural after that. I’m no fan of artificially difficult transformations and while Primal perhaps lacks a ‘wow’ moment, it’s well thought out and is something I’d do for fun. The breastplate is maybe a little fiddly, but not annoyingly so. 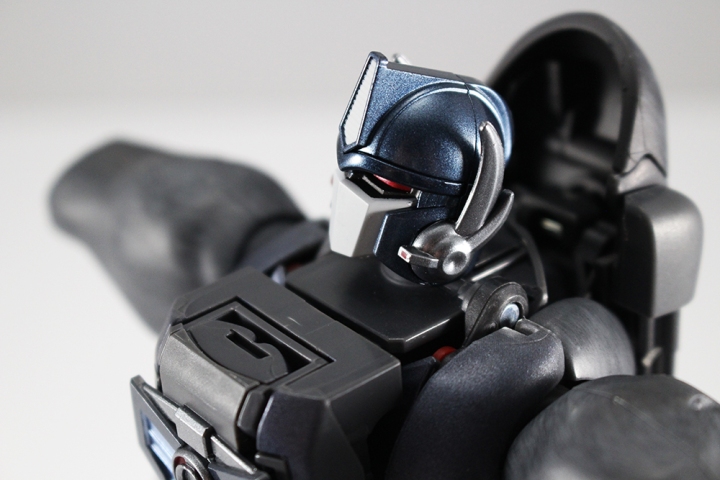 It’s not all perfect, obviously. I’m a bit surprised by the number of spruce marks scattered across the gorilla’s grey panels. The red paint isn’t perfect, either, with several traces of (admittedly mild) red paint overspray. I had thought (as you’ll see in the pictures) that the swords were molded to be held with the outer curve pointing inwards. It looks that way when you examine the shape of the hilt and Primal’s palms. However, it turns out they sit just the same when facing the other direction. Neither sword will click into his hands facing in either direction, however, although the fingers (triple molded and single digit) hold it in just fine when closed.

How much would Primal have cost us pre-Brexit? Because whatever way you look at it, £90 feels like a real stretch for this guy. Judged on his own merits, however, the figure works really well and, some minor quality issues aside, feels like a worthy addition to the Masterpiece line. As someone with zero connection to Beast Wars, I’ll perhaps never love this guy in the way he deserves, but I wouldn’t hesitate to recommend him – especially if you can find him at a discount.