Do you reckon Fanstoys are the most divisive third party company on the market? Actually, no, thinking about it, that would be X-Transbots. But what does set Fanstoys apart is its following. I don’t think there’s a more actively loyal fanbase for a 3P company out there. But where ardent support comes, vocal opposition always follows. Such is the way with fandoms. It’s almost impossible to mention the company online without supporters and detractors pouring in. Which is all a bit tedious, really. 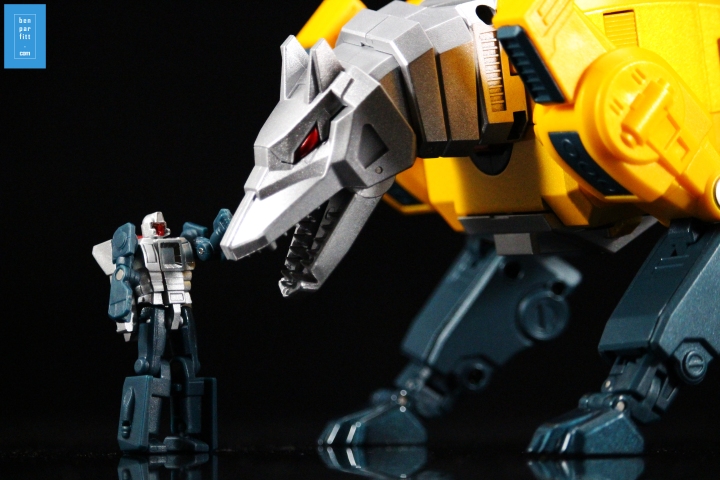 It’s not hard to see why Fanstoys is so popular. Quakewave, released back in 2013, still stands as one of the all-time best 3P Masterpieces ever made. Its dinobots are a triumph and I’m also a big, big fan of Tesla, its Perceptor. Yes, even the face. Great figure, that.

I shall admit, however, that its recent output has not tickled my fancy anywhere near as much. Its three insecticons definitely look the part, but fiddly transformations and fragile parts abounded. I much preferred Maketoys’ take on Hound, too. There’s a hell of a lot on the horizon for Fanstoys, though – which has become a bit of a trademark (or a joke). Upcoming figures include Galvatron, Grimlock, Omega Supreme (all £400 of it!), Devastator, Springer, Seaspray, Jetfire, Trailbreaker, Blitzwing, Kup and Sixshot. Busy busy.

And largely, by this stage, you sort of know what to expect. Good looking bots, weight, faces only a mother could love, tight and possibly squeaky joints, possibly a fiddly transformation step or two and shit loads of die cast. Saying that, not all of the above can be found in Lupus. There’s not a squeaky joint in sight, the transformation is smooth and I quite like the face (although I like a lot of FT’s faces, to be fair). What you will get is a whole lotta die cast, however. 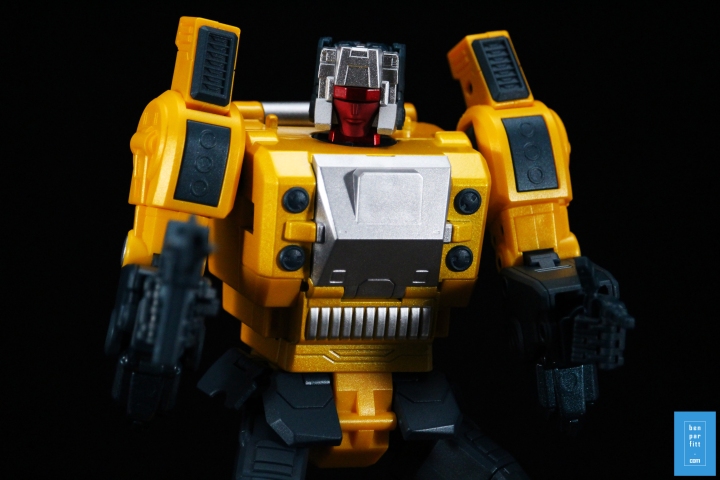 Seriously, out of the box the first surprise was the heft. The metal feet and chest give this guy a weight not found in many of its contemporaries, although I’m not sure if that necessarily adds to things, really. Certainly Masterpiece Inferno shows that a chunky and top-class bot does not need die cast, and I’m not sure Lupus would be any less for the lack of it. I know many like the weight and feel, however, and it’s not really a downer so WHATEVS.

The paint is great, and the colour match between plastic and metal – while not perfect – is pretty good. FT is always spot on with the quality of its finish and Lupus is no different. This feels like a premium bot. 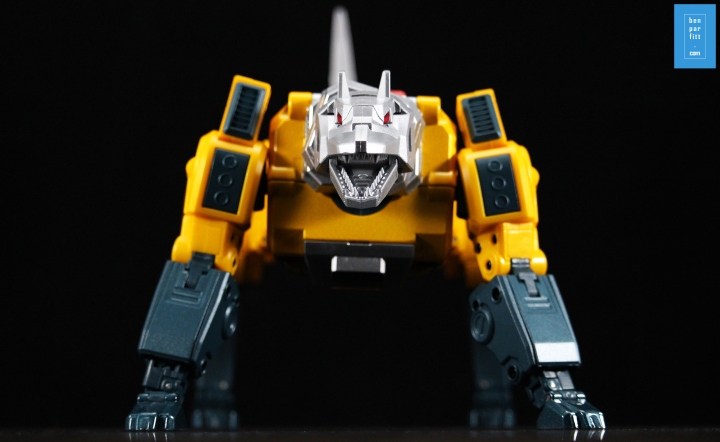 Lupus, of course, is FT’s first stab at a headmaster, and the head bot itself is pretty good. If I’m honest, I prefer the design of Maketoys’ headmasters (more on them later), but in its own right it works well. You get ankle tilt, which is a nice touch, and some decent articulation. What you don’t get is any sort of attempt to hide the rear face, and molding of the arms means that movement is actually far more restricted than it looks designed to be. 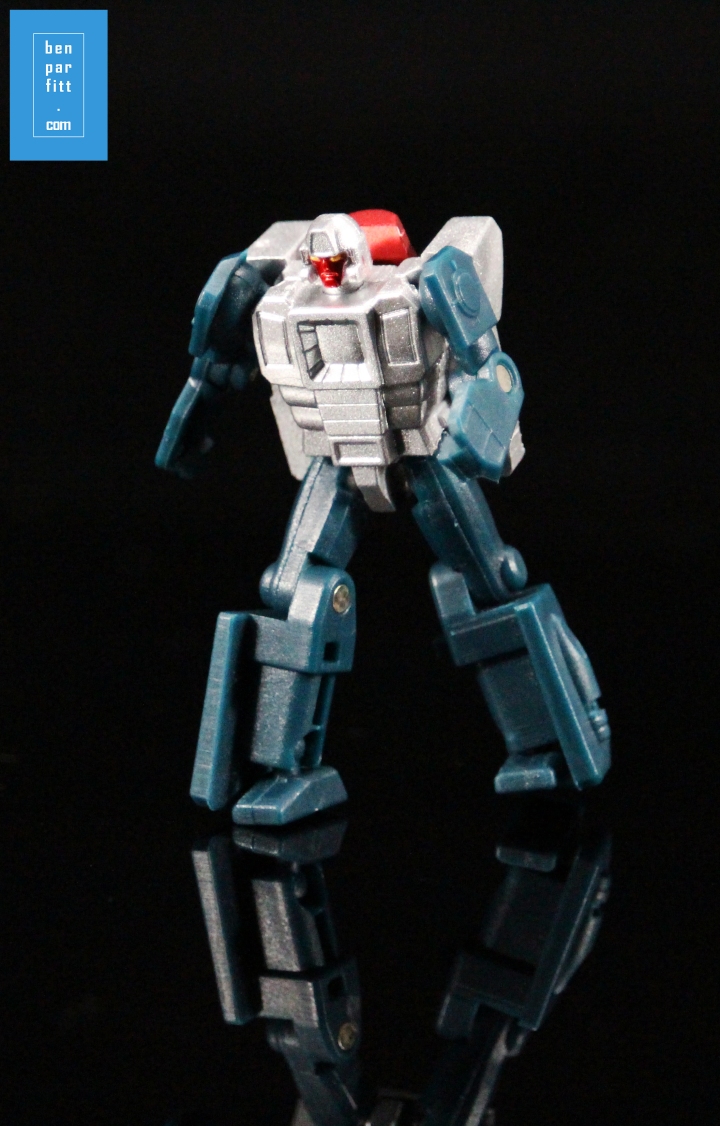 The hands on the main bot are FT standard issue, so are therefore good, even if they feel a tiny bit dated compared to KFC’s most recent and excellent hand design. Mine is pretty reluctant to hold his weapons, sadly, although the strong individual finger joints means he’s able to physically hold them in place quite well, even if the palm clip is a bit weak.

Articulation is probably going to be your biggest sticking point with Lupus overall. Outward shoulder movement is really quite poor, and you only get 90 degrees at the elbow. There is enough there to have him hold his rifle with two hands, though, which is something I always love. Knee and hip articulation are a lot better, which is more than can be said of the ankles. The transformation of the feet is clever, but the price you pay is a limited amount of foot articulation, with very little inward lean – and it’s a huge shame. The folding in of the animal leg under the sole of the foot means he doesn’t actually stand quite flat, either, although I don’t find this to be a massive concern. 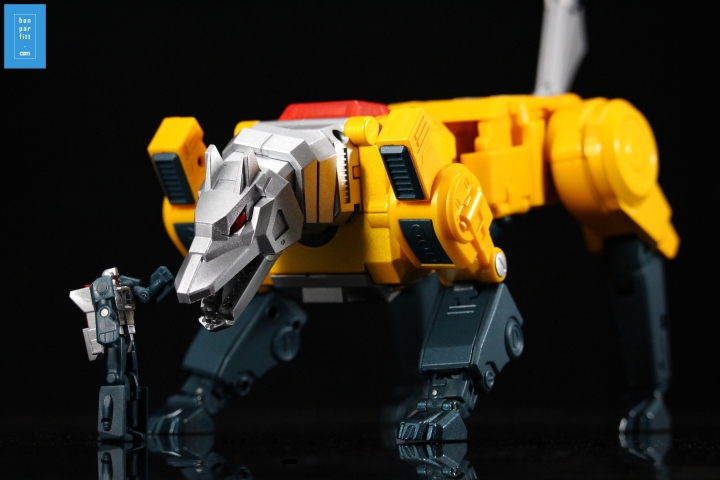 I’m less enamoured with the wolf mode. Compared to the character that oozes from the alts seen with both the Titans Return and Fansproject deluxes, Lupus feels proportionately odd. Good joints in the wolf legs and great paw tilt means a range of posing is possible, but the whole thing looks a bit too flat and wide. The angular lines and boxy design that works so well on the bot does not translate so well to an animal. I also would have loved to see the wolf head look up, but there’s not a hint of upward movement in any of the three heads you’ll find here. In fact, only the wolf head can look down. Still, I do enjoy the novelty of an MP wolf and weaknesses aside, I do like what we get here.

(UPDATE 22/12/16: As has been pointed out to me and others such as Maz, it is possible to achieve a bit more alt head articulation by taking advantage of the double joints in the neck.)

Fortunately the transformation is a big success. There’s very little to frustrate and he passes the ‘instructions only needed once’ test. A simple transformation that does the job with minimum fuss between two good modes is the single biggest plus for a playable transformer, I think, and hopping back and forth here is easy. There’s some clever stuff going on with the lower legs that I really enjoyed. Both modes are also pleasingly kibble free. 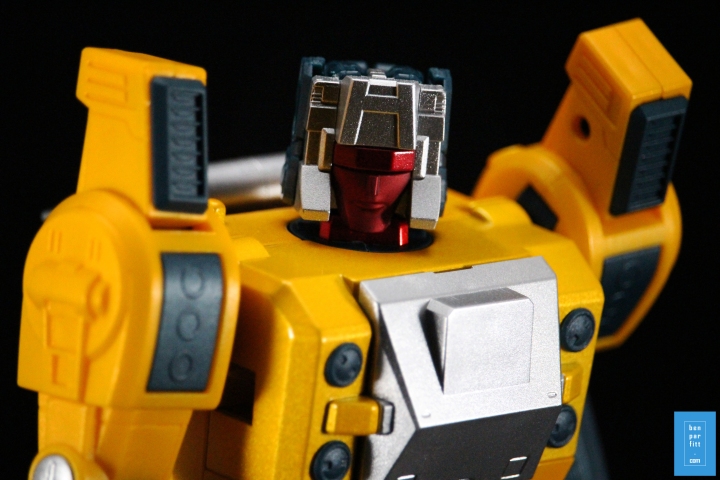 A fair few folk reading this will mainly be doing so to find out if the three big complaints from previews can still be found here, so let’s run through them one by one, shall we? 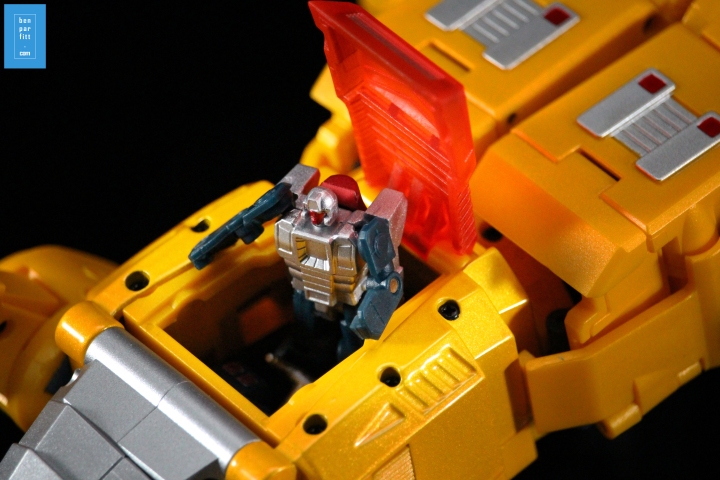 Firstly, the cockpit. Review copies saw the headmaster cockpit randomly dropping down into the chest in wolf mode, a problem FT said would be fixed for the final release following just a few weeks later. And, despite my skepticism, the issue does appear to have been addressed. Don’t get me wrong, when handling the alt my cockpit fell down plenty, but I never got the impression it would fall without contact. Access to the side grips used to move it all up into place is a bit of a pain, however, and getting it into the raised position can be a right fiddle as getting good contact on both sides at the same time is tricky as there’s not much room for my chubby fingers. I definitely wanted to feel a ‘click’ when the cockpit is raised and its absence is missed. 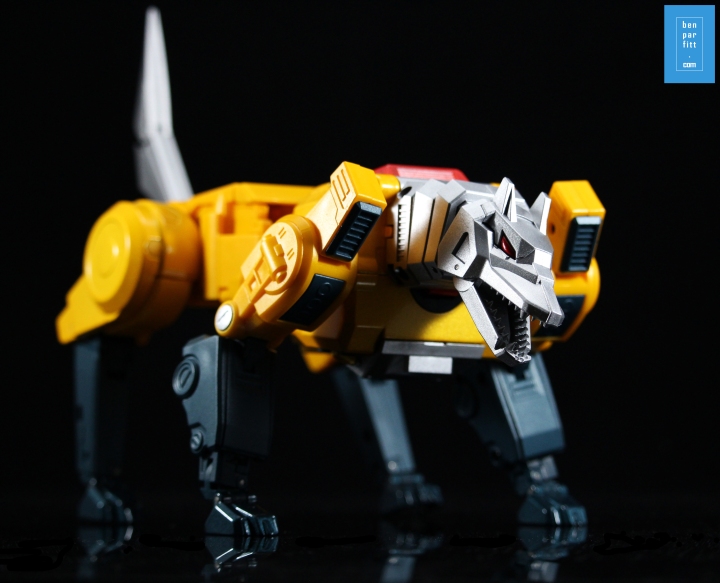 Some forum users seem especially concerned about the longevity of the friction that holds the cockpit in place. Will it last forever? Nothing lasts forever, my friends. Loved ones pass and even mountains eventually erode. Our sun will one day supernova and our planet obliterated. Even if you keep your bot locked away in Fanstoys’ styrofoam cage forever, the earth is hurtling through space at 1,000 miles per hour and is constantly fighting with the force of gravity and ultimate inevitability of decay. So sadly yes, I would guess that yes, one day Lupus’ cockpit will fall. Which is all the more reason to liberate Lupus from his packaging and enjoy him while you can. Mine’s still holding up OK.

Then we have the loose head. Yes, the neck mechanism onto which the headmaster attaches is loose. Loose enough to swing about in a gale force wind? Maybe. A light breeze? Nope. Is it looser than you’d want? Definitely. The face sculpt is fine and nicely defined, although I didn’t bother with the alternative ‘chinny’ version included in the box. The stock face looks a lot better.

Lastly, the side clips. There are two slots in Lupus’ waist that seem to correspond to two tabs on the lower wolf torso. There’s no way for the tabs to reach them, however. This doesn’t pose any problems at all in wolf mode, but the fact that they’re there but not usable is an ever so slight irritation. 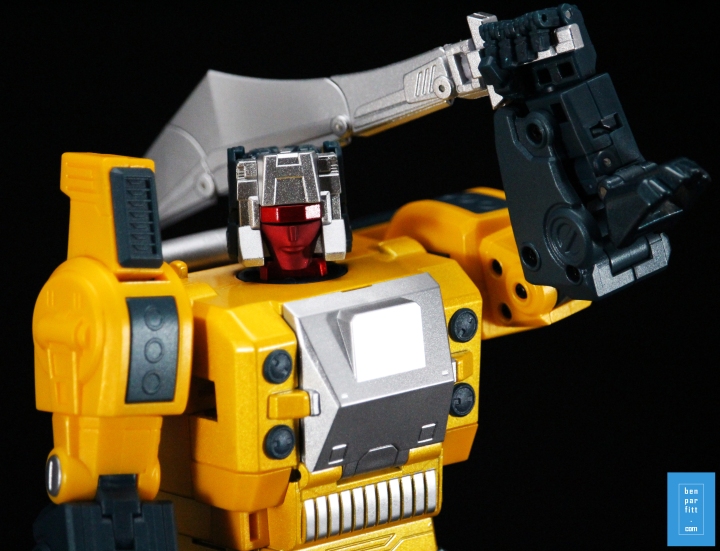 Of far bigger irritation to me are the plastic panels around the rear of the robot legs. With nothing to connect to they are very liable to get pushed inward when handling the robot. The hinge that connects them is firm enough that they hold perfectly well for posing, but the amount of time I’ve spent trying to get my fingers in there to un-collapse them is pretty bloody annoying. 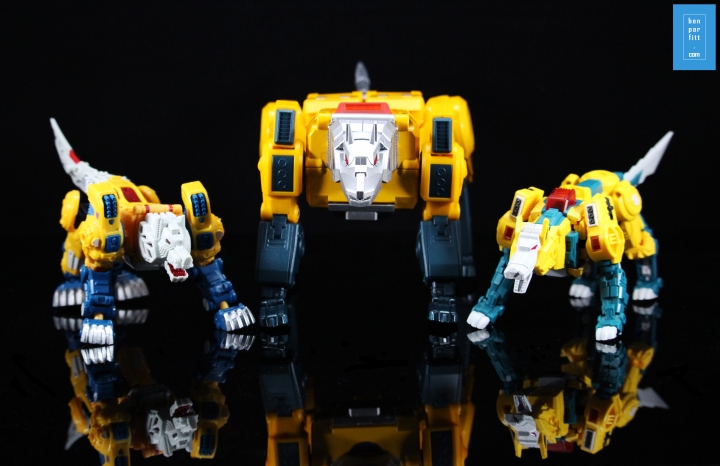 Ultimately, however, if you’ve started down the Masterpiece Headmaster road, Lupus is a good addition to that collection. He does perhaps suffer in comparison to Maketoys Cupola (Chromedome) and Ironwill (Hardhead), as they are two of the very finest 3P MPs we’ve seen, and from a company who I think has stolen FT’s mantle as the best 3P in the business. Lupus is not as good, and should Maketoys make its own Weirdwolf, I can imagine myself switching. However, should MT not do that, Lupus is a fine MP Weirdwolf. And if the Headmasters are finished with a combined effort from both companies, then that’ll likely be splendid.

Lupus makes a great first impression and is every bit as solid as you’d expect from Fanstoys. The transformation is great, but the bot is a bigger success than the alt. Some niggles with panels and the cockpit hold it back, although perhaps not as much as the articulation. Ultimately, Lupus isn’t as good an experience as either Cupola or Ironwill or, in fact, the excellent recent Titans Return deluxe. Saying that, he’s a well made and fun bot whose premium finish makes him a star of the shelf. 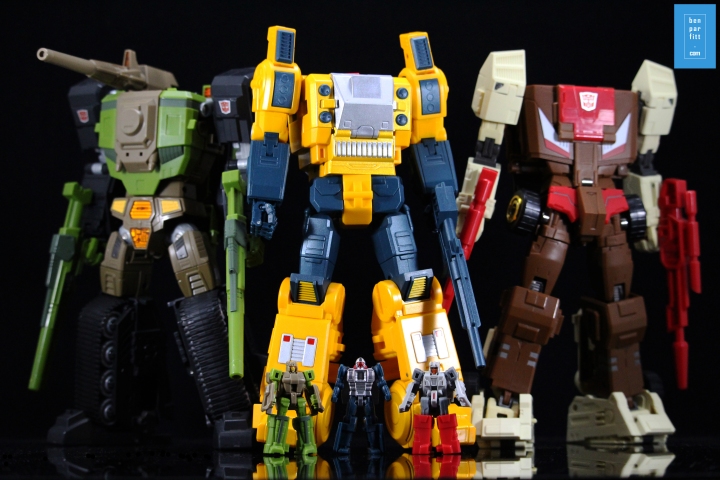