Oh what times are these when marginal characters such as Trailbreaker can be subject to third party toy wars. MMC’s Terraegis finds itself up against Badcube’s Speedbump for the place on your shelf you’re keeping warm for an official version, should we ever see it. Or could it be, we whisper to ourselves in darkened corners, that one of the would-be Trailbreakers is actually an is-be Trailbreaker? Yes, we’re kicking off 2017 with the very worst in word play.

I’ve not handled the Badcube bot, although I do have the company’s Hoist on the way. From nowt but the promo pics I felt MMC’s Trailbreaker nailed the toon aesthetic perfectly, while Badcube’s Hoist looked like a great rendition of the G1 toy. And they do say variety is the spice of life, and as I’m a maverick I thought I’d put one foot in each camp. I’m wild and out of control.

My past with MMC is pretty mixed. I loved Sphinx, whose delicate line in engineering really tickled my wotnots. As much as I admired Feral Rex, however, he’s currently on my sales list, which perhaps betrays my lack of enthusiasm for him. And its fembots? Salvia Prominon looks absolutely great on my fembot shelf, but I ain’t ever transforming her again. I did like Knight Morpher Cyclops, hellish tab nightmare aside.

My affections for Badcube are also muted. Wardog looked fucking wicked in both modes but DEAR GOD that transformation. I mean, who the hell signed off on a design where the transformation requires that the shoulder ratchet is actually moved from one housing to another? It’s madness. Sunsurge was good with a transformation that, while stupidly intricate, was at least achievable and satisfying in some respects. And yeah, Brawny was OK. Let’s not mention Huffer’s paint.

One thing I did like the look of was MMC’s Backdraft, although I never got to handle one. I’ve not heard great things, however. It seems he’s pretty to look at in bot mode but a nightmare to align in alt, and with plenty of QC issues to boot. Which is not an entirely dissimilar story to Terraegis. 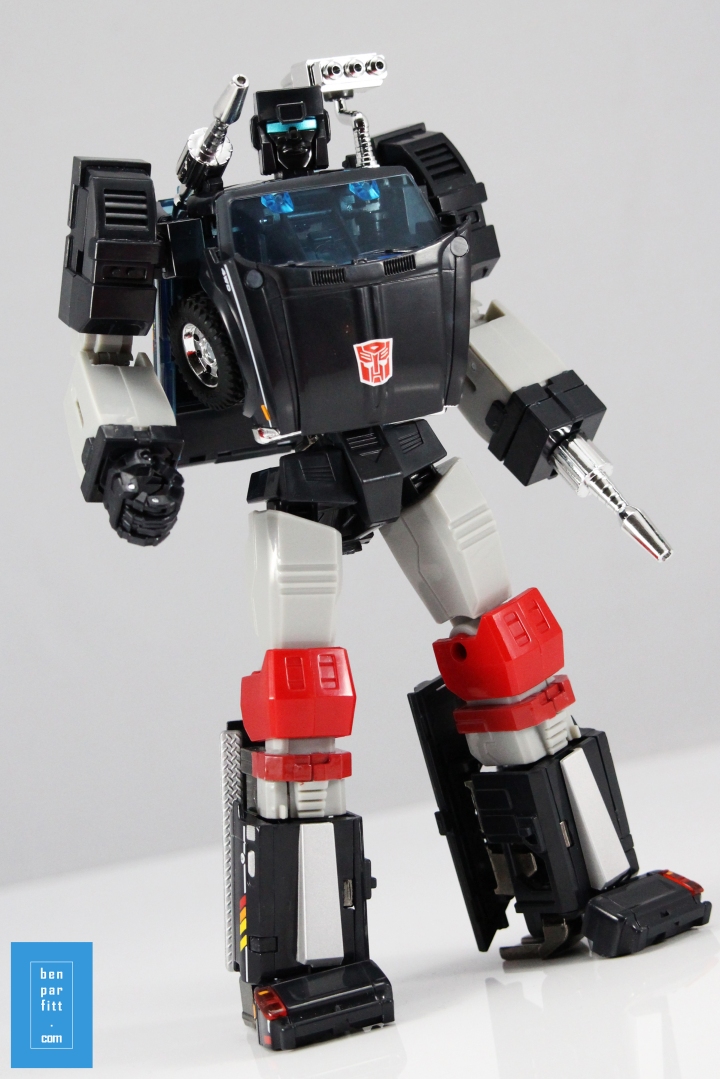 There were moments in my early time with Tarraegis where I thought we might be looking at a 5 Star bot. There are things I absolutely adore about him. But for every moment of triumph there’s also a moment of despair. He comes so very close to Takara-conquering glory, which makes the fact he falls short all the more disappointing.

The bot mode is absolutely fantastic. He captures the cartoon look so wonderfully, and has the articulation to back it up. Both the arms and legs are solid, with an especially well done crotch that allows for all manner of badassery on the shelf. He comes with as assortment of chromey bits and two heads allowing you to go for either toy or toon looks, complete with two different configurations for the chest to go along with them. However, as much as I like the toy look, the design’s physique is clearly aiming for toon, and as such that’s definitely the configuration that works the best. 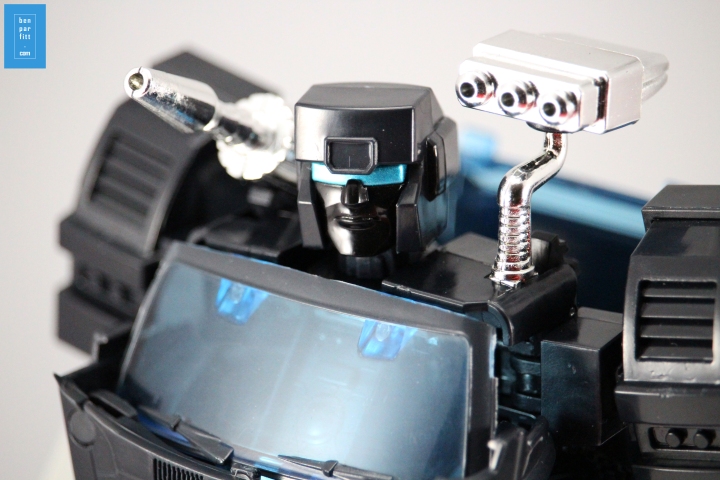 I also LOVE the leg transformation, that boasts a really neat flip and tuck mechanism that’s wonderfully loose to manipulate but held together brilliantly by the precision of the design. I also adore the clicky slide of the shin cover that hides the inner components and finishes off the leg. It’s all wonderful. There are actually quite a lot of small and precise transformation steps to follow and missing one can actually land you in a bit of a pickle, but nail the routine and it’s a delight.

The alt, too, is a great looking thing, with detailing that puts Takara’s recent designs to shame. However, while the bot clicks into place perfectly in an awesomely posable and largely kibble-less triumph, getting the alt to tab together correctly is far more frustrating. I’m often left having to choose what to sacrifice – do I correctly fold away the arms under the front bumper (which in itself is another sturdy, clicky delight) and put up with a gappy roof, or do I tab the roof in nicely and tolerate the slightly low hanging fists and not quite tabbed rear end? I shouldn’t be putting up with any of it, frankly. 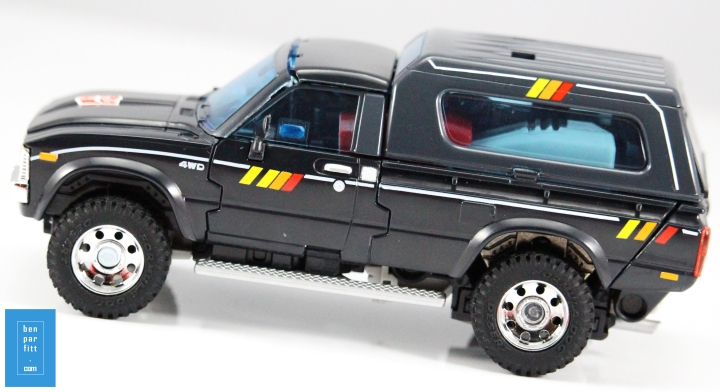 This failing speaks true of the overall package, which feels very much like a corner or two too many was cut. While good overall my copy has too many little niggles that let the side down – be it the shitty chrome on the accessories, the shoulder missile (or gun hand, as they’re interchangeable) that won’t clip together properly or the wrist cuff that keeps coming off. The plastic wing mirrors, too, are a snappage waiting to happen – something MMC seems to openly admit in the instructions. It even chucks in an extra pair in the box. And as much as their hiding during transformation is another nice touch, why not just make them rubber and avoid the issue entirely? 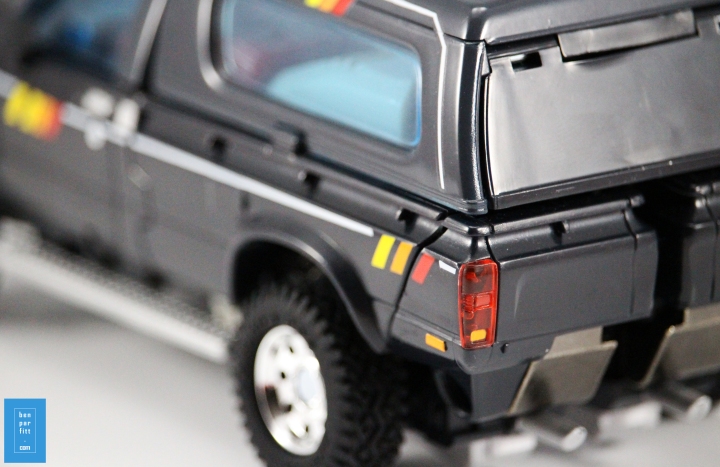 The shoulder mounting mechanism for the missiles is fiddly and stupid, and it’s sad that these things all need to be detached for transformation and then attached at various points around the alt. My understanding is that Badcube’s bot builds these elements into the transformable design. Why, too, did MMC not take the extra care to make the wheels tab in properly? They do the job well enough, JUST, but it’s just another thing that an additional QC sweep would have tidied up. Do note my mad skills at getting the Reprolabel crest to sit smoothly across the bonnet grooves – a rubber-ended pencil, soft cloth, patience and a hairdryer, my friends.

The knees are quite clever in how they transform but the design uses a double hinge that means you’ll often end up bending the ‘wrong’ bit when posing. And the roof, which is sprayed clear plastic, is nearly a match for the body but, again, not quite. This really does feel like a premium design let down by slightly sub-par materials and one design phase too few.

I will say this, however. I got this at the same time as X-Transbots’ Eligos. Every time I wrestled with XTB’s effort I found it an absolute pleasure to return to Terraegis. Both bots lack quality, but only one lacks heart – MMC’s design can still deliver a real thrill, even if the execution ultimately frustrates.

Sticking with the comparison, I think the key factor is ambition. Eligos never aspired to be anything more than it is. It’s the final execution of the intended design. I can’t shake the feeling, however, that MMC at one stage had a defining classic on its hands, but at some point the ambition abandoned them. And what a crying shame that is. 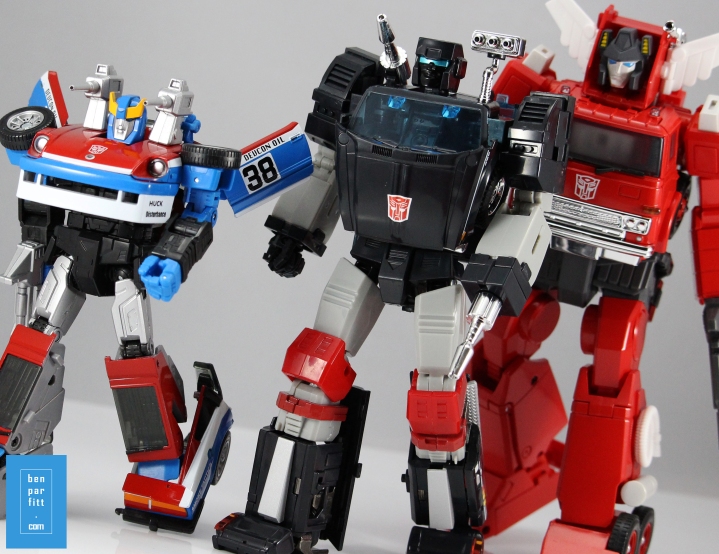 There’s the basis here of a 5 Star bot. The design is great and parts of the execution are inspired. Sadly, MMC’s recent dropping of the QC ball continues, and Terraegis is robbed of the victory he deserves by too many little frustrations and not enough dedication to quality. I’m perhaps scoring him more highly than he deserves, but what is done well here is done very well indeed, and for that achievement he certainly scores well on the good will scale. Think of him as a cousin you’re fond of and always hang out with at the family Christmas gathering, and who does lots of charity fun runs and volunteers at the hospice shop in their spare time, but who also votes UKIP, has a Princess Diana tattoo on their arm and listens to Genesis. You love them, but you keep ignoring their Facebook friend request. 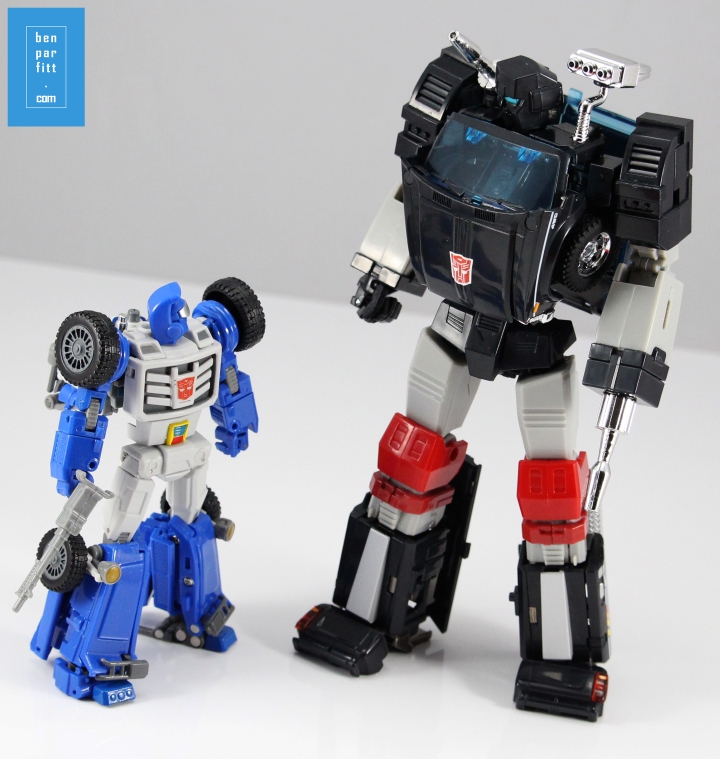