This is my first stab at a Transformers review. Be kind! I lack the wordsmithery of Sixo, Maz and Liam and the photography skills of… Sixo, Maz and Liam. I used to really enjoy Sixo’s photos. Now they make me incandescent with fury. But I’ll get better, I promise x

Many of you will be entirely familiar with all of this, but for those who aren’t, a refresher: X-Transbots MM-IV+ Survivalist Ollie, to give him his full name, is based on Autobot character Wheelie. He made his debut in the cherished ‘80s animated Transformers film, and was a right twat. A right rhyming twat. Regardless, us collectors are completionists. A twat he may, be but he’s a canon twat, and thus will be a key requirement for anyone putting together a Masterpiece Movie collection.

X-Transbots is equally as divisive. The company has a surprisingly strong following, most of whom champion its bot designs. And indeed, they can be mighty fine. Its detractors, however, cite frustration with what can often be over-fiddly transformations and the sometimes cheap feeling plastics the company employs.

XTB’s track record is patchy, certainly. Apollyon, its Masterpiece Megatron, sent the fandom into a frenzy upon its unveiling, filling as it did an absolutely crucial hole in the post MP-10 scale Masterpiece line-up. The figure still commands a legion of adoring supporters, but to my mind he was a crushing disappointment. Those who criticise him are frequently dismissed as being bitter about having a ‘bad copy’ but make no mistake about it – even a ‘good copy’ of Apollyon is a bad figure. With a transformation from hell and plastic from a recycling plant, Apollyon’s only saving grace was that he looked the part standing next to MP-10. Although with Maketoys Despotron and DX9 Mightron now out in the wild, maybe he can’t even boast that any more…

The company’s recent output has been mixed, I think it’s fair to say. Boost and Hatch haven’t been especially well received, thanks in no small part to some odd paint choices in the first (and second) run. Its Andros, based on fellow movie character Scourge, was actually really good. Both modes look great and if it weren’t for the appallingly designed feet, which are an absolute BITCH to transform, I’d possibly even herald him as a triumph.I liked him enough to pre-order Eligos (Cyclonus), which may possibly arrive before the end of the year. It won’t though, will it? I’ve also got a massive soft spot for Arkose, based on G1 tiddler Beachcomber. He boasts two great modes – the bot mode is STUNNING – and an actually OK transformation.

There are caveats to Arkose’s success, of course. The plastic around some of his hinges can become stressed, and the roll cage falls apart during transformation. I glued mine together, meaning some twisting and squeezing is required to tip-toe around the tolerances, but it definitely ‘works’ for me.

But that’s the thing with XTB: caveats. Yes, the bots look great, but are cheap materials and at times nightmarish transformations a price worth paying for that? Should a ‘perfect’ bot mode always be the goal no matter the cost, or should bot mode compromises be made for the sake of hitting all three targets – bot, alt, transformation? Takara remains the king of striking this balance, and arguably that’s why its Masterpieces still win out. 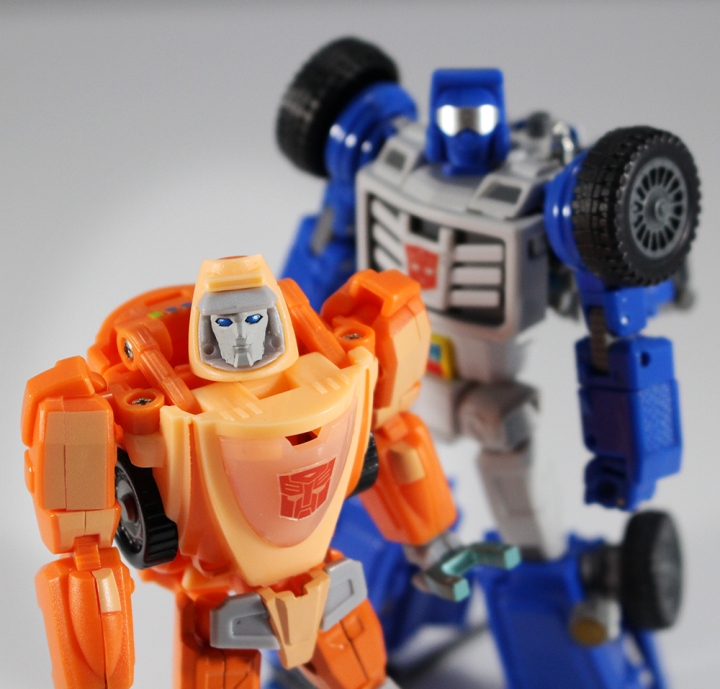 So, Ollie. You may not be shocked to hear that Ollie has a pretty good bot mode. He does look sweet on the shelf. You may also not be flabbergasted to learn that he’s also a largely dreadful, inexcusable transformer.

Ollie was originally released in 2014 to a cacophony of disappointment. The plastic was ghoulish, the transformation a tolerance nightmare and his ability to stand heavily compromised. Fast forward to October 2016 and we have this ‘improved’ re-issue. Check out this image from the wonderful Toybox Soapbox – the blue bits are all of the new components XTB has introduced to improve things.

The result? I never handled a v1, but if this is an improvement then dear god v1 must have been WOEFUL. New Ollie does stand, at least, and he’s not floppy. And he still looks awesome in the pictures. But the in-hand experience is pretty grim.

Right from the off, shipments of the figure were delayed because the (new) diecast thighs were prone to paint chipping. Retailers are now shipping him out with a replacement set of (also diecast) thighs. Also in the spares bag is a new face to supplement the two in the box. 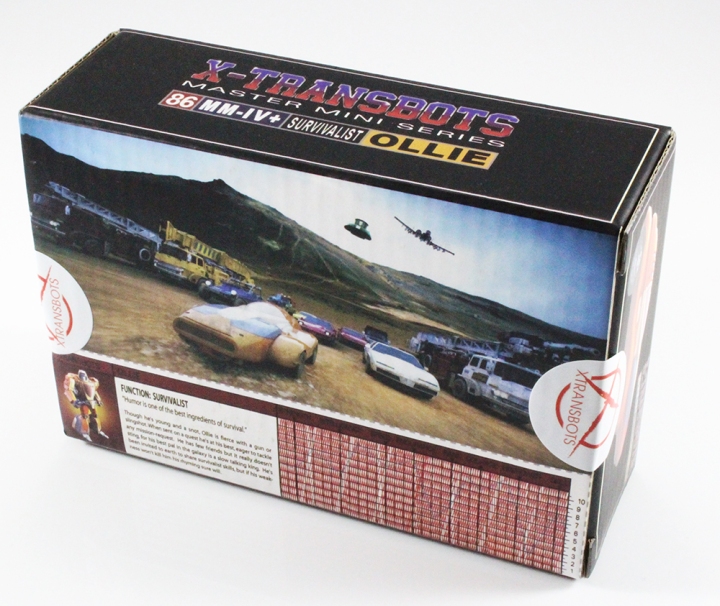 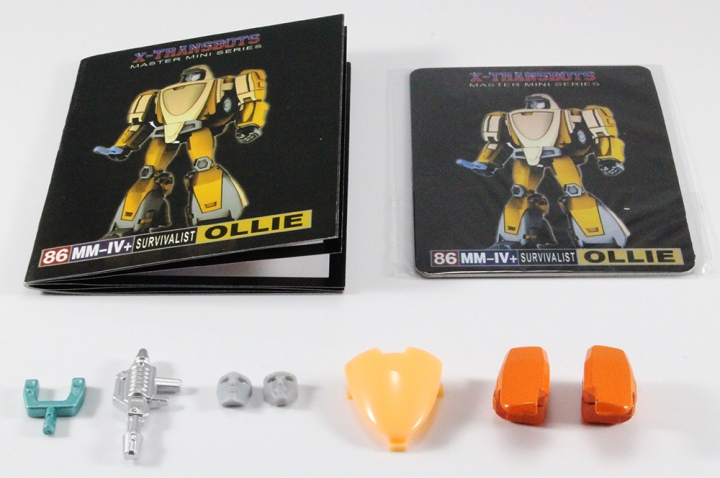 The bad news is all three faces are cack. Two are painted to the point of losing some definition, and the other is sharper but with scratchy, unrefined edging. And let’s not even talk about the box. XTB’s box designs are an acquired taste by anyone’s standards but this is real GCSE-grade stuff. It’s blurry, lacks margins and feels like a KO. Worse than a KO, actually. But still, I’d be happy if he shipped in a literal doggy bag of dog shit if the figure was up to scratch. 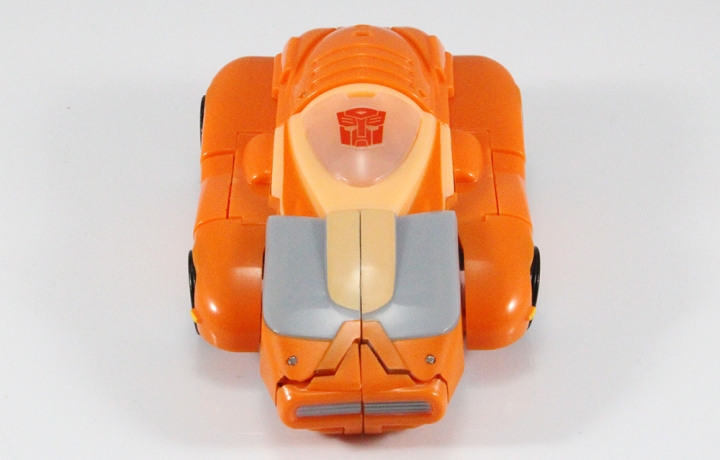 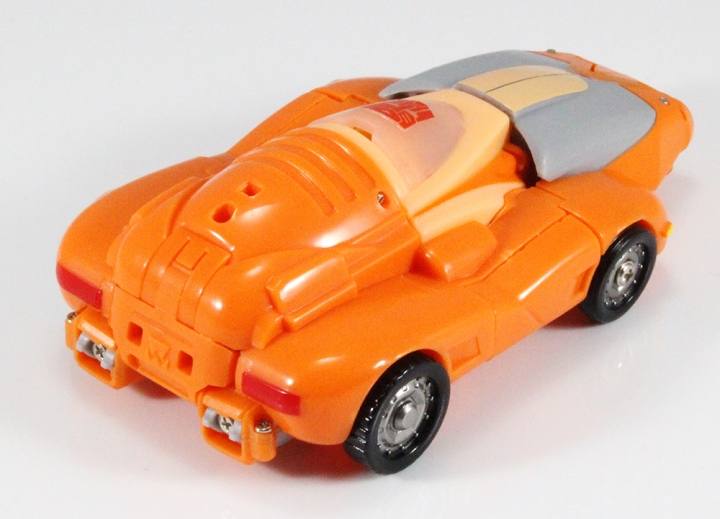 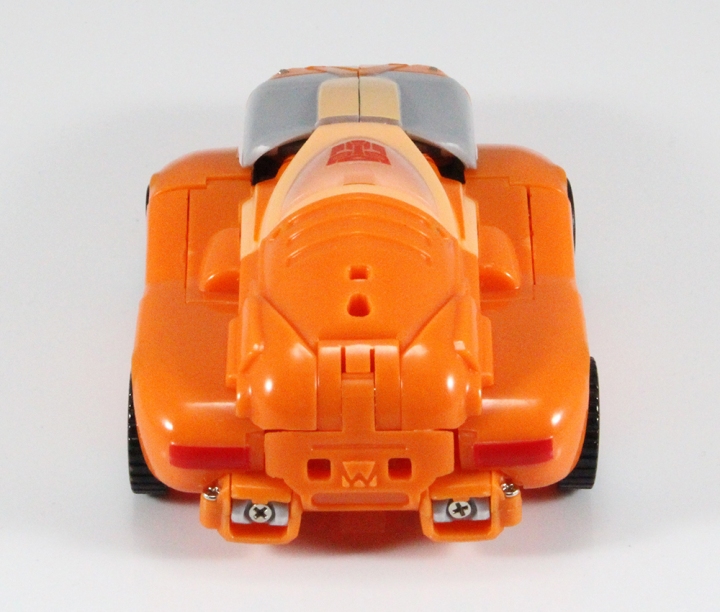 Ollie arrives in alt mode, which sadly draws attention to the fact that his front – y’know, the single most prominent bit of the entire vehicle design – doesn’t tab in properly. There are stubs of poorly defined plastic that are presumably meant to act as tabs, but they’re not up to the job. A bit of jiggery pokery with the knee caps improves the situation, but one of mine remains very loose regardless.

The addition of die cast in the legs, the reason for which I can’t quite fathom other than creating the illusion of ‘premium’ through weight, means that the alt is very front heavy, too. Although at least it rolls.

Basically the transformation includes two entirely separate worlds of pain – the upper and lower body. The legs require far too much precise positioning to lock together in place in alt mode, although going the other way is satisfying enough. And when done, the bot legs are solid, although that token heel spur could have done with an extra millimetre or so. Note too that the knee caps do now allow for straight legs, v1 sufferers.

Regarding the upper body, there simply isn’t the room needed to perform the transformation comfortably. When in bot the rear section of the car does fold up nicely, resulting in a quite impressive kibble-free upper bot. But simply finding the space to fold the panels and then slide each side toward the central is tricky as hell thanks to the arms. This leads to either microscopic adjustments and various sections are moved into place, or instead simply bending the plastic in a way that you’d presume was never intended to allow parts to pass one another. It feels horrible. It gets easier, mind you, but never feels quite right, with too much stress being put on the assorted hinged components.

Amusingly, the instructions (which are another budget, low-grade botch job) simply depict the torso transformation with the section completely disembodied from the otherwise intrusive lower section. Perhaps XTB expected him to snap in two?

When you get there, though, there’s no denying he looks pretty good. Articulation is OK, with 90-degree elbow bend and a fair amount of give in the legs. Balancing for dynamic poses can be a task, however. 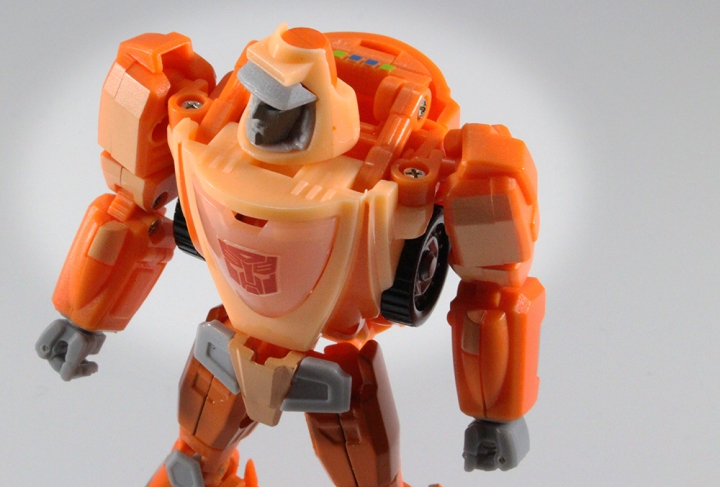 What are we left with, then? A forgettable alt mode (which to be fair is a decent-ish representation of Wheelie’s forgettable alt mode), a wholly unsatisfying transformation, but a pretty decent bot who very much looks like the screen character come to life. In that respect XTB has been successful, certainly, and for many that’s enough. But for others, the v2 will feel like a missed opportunity. This feels like outdated engineering. The quality of 3P output had ramped up so much in such a short space of time that it’s not uncommon for stuff that really isn’t that old to feel a bit outdated. So for a mold that was bad in 2014, that spells extra trouble in 2016. And I’ve already had to tighten one of the shoulder screws.

However, Ollie doesn’t cost the earth. And when I see pics of him with other Masterpieces I’d be lying if I said it didn’t bring a smile to my face. Plus, there are people I know and respect who DO like him plenty, and that’s definitely worth taking into account. 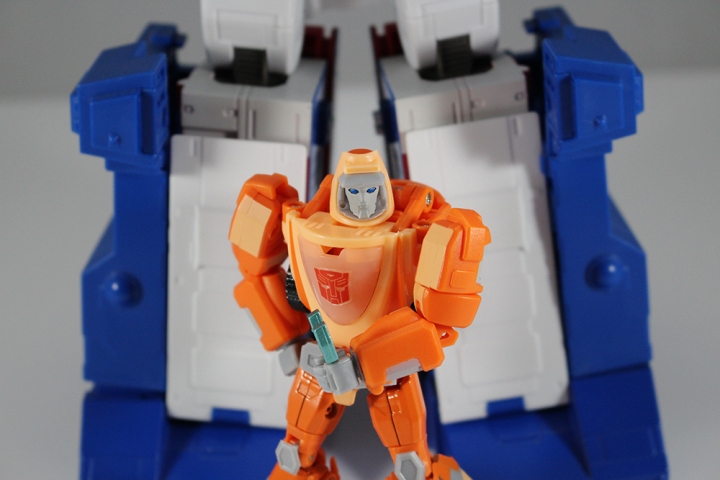 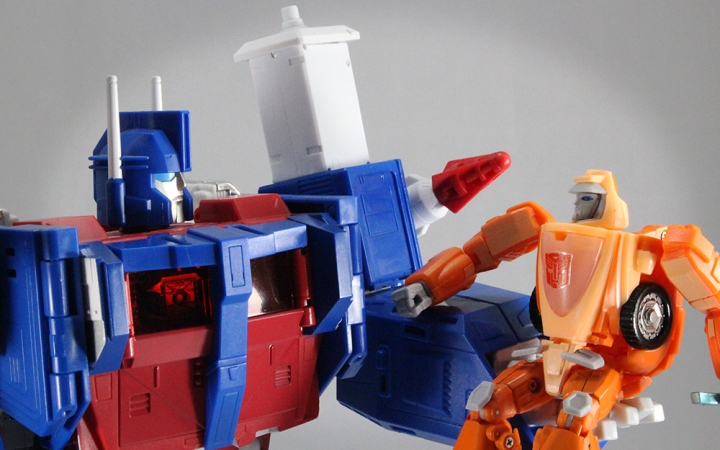 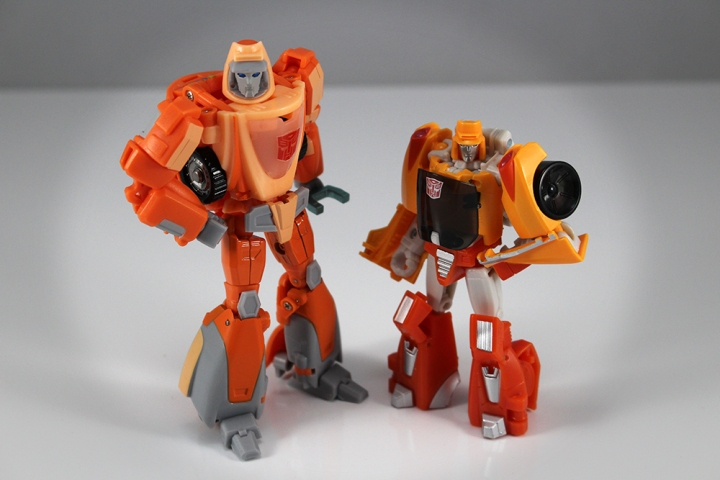 I also wonder if collectors are being made to pay the price for the demands of v1 owners for a discount on this revision. Understandably, many of those who forked out for the original were not best pleased with being asked to pay again for what they felt they should have received the first time out. I get that, but the flip side may be that XTB simply didn’t invest in the materials it had intended for a figure that it was going to sell for half the price it had planned to a large number of buyers. Or maybe it was always going to be like this, who knows?

As if often the case, it comes down to what you want. If you want a Wheelie to play with, go grab the Titans Return one (although that’s not a masterclass in tolerances, either). If, however, you’re after an authentic Wheelie statue that will sit comfortably in your Masterpiece Collection and pose OK in your lightbox, then Ollie might just do a job for you. Or is that XTB doing a job ON you?