It’s a good time to be a seeker collector (that’s the name we give to Starscream and his Decepticon jet pals). It’s not such a good time for Takara’s seekers, however. Its first conehead release (the three jets where the cone sits above the head in robot mode), Ramjet, was hit with one of the worst QC controversies we’ve had in the official line, with huge numbers of copies coming with incorrect shoulder assemblies. For a figure that cost so damn much (even by Masterpiece standards) it was a shocking error, and one that weighed heavily for anyone pre-ordering its next conehead – Thrust. 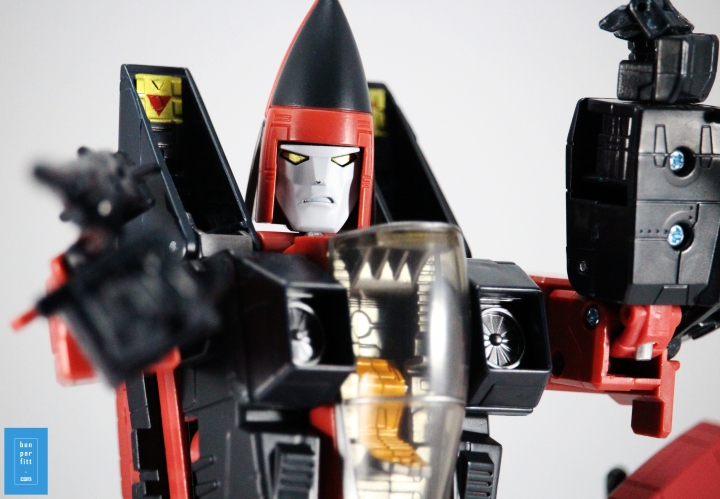 Adding to the pressure, the market is currently being inundated with a flood of knock off and third party seeker alternatives. Toyworld’s coneheads can be pre-ordered for £100 apiece, shaving £60 or so off Takara’s price. If Toyworld’s odd additional height is too much to stomach, at least three companies are currently pumping out KOs based on a seemingly scattershot selection of Hasbro, Takara and even iGear designs and colours, meaning any seeker buyer has an unprecedented amount of choice. Every one of these choices is cheaper than Takara.

How good are these KOs? I’ve not had one in hand, and frankly it’s impossible to tell from fan feedback. Plenty claim they’re as good as or even ahead of the official figures, while others cite a myriad of manufacturing and mold problems. That’s the thing with the fandom – separately objectivity from fan-tainted bias is tough. Some folk will reject 3P on principle and evangelise everything official. Others seem to spend their lives scouring the internet for fans of official to butt in on and remind them how “shit” or “trash” ALL Takara product is. It’s exhausting. Honestly, people are just fucking tiring, aren’t they? The feedback for Thrust is equally as hard to interpret, ranging from disaster to victory depending on what you believe.

There’s no escaping the fact that Takara’s Thrust does suffer a serious problem, though – his waist. Virtually all copies have a looser waist than you’d expect, and some users are reporting a really quite serious amount of wobble. It doesn’t affect the jet mode, but it can cause issue with bot mode posing. It can be fixed by basically jamming something around the pin joint to fill the gap (be that string or, in my case, a small strip of translucent rubber) but let’s not muck about – after Ramjet’s problems, Takara could ill afford another cock-up. Waistgate is a far cry from Shouldergate, but it’s a problem collectors who have paid above fair market prices on a figure should not be facing. 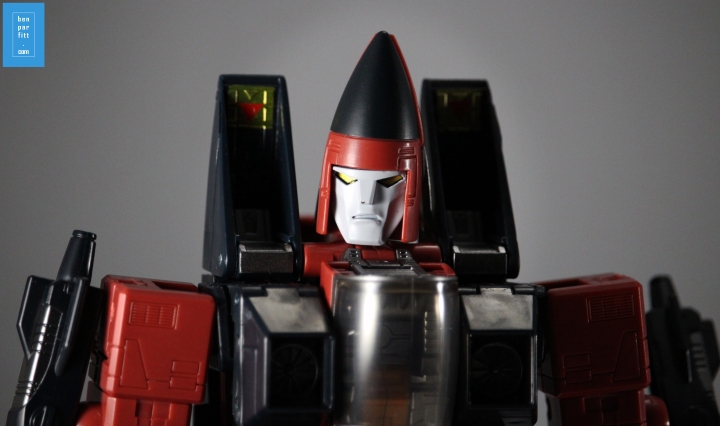 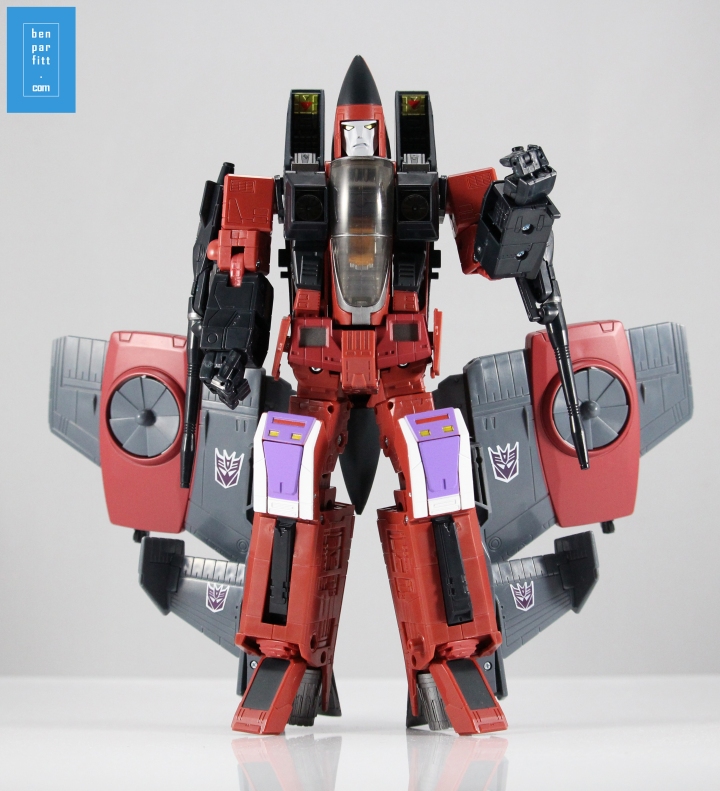 Saying that, Thrust makes improvements over Ramjet, pouring cold water on the idea that Takara is perfectly happy to use its ancient MP-11 molds with no effort to maintain quality and address its issues. The front landing gear now holds the jet’s weight, for instance, and, unlike Ramjet, the opening canopy that reveals it is perfectly willing to remain attached. The torso connects to the legs nicely (a longstanding MP-11 problem), and the breastplate missile assembly is more willing than ever to stay in place when the arms are twisted up. That’s not to say they won’t misbehave from time to time, however. 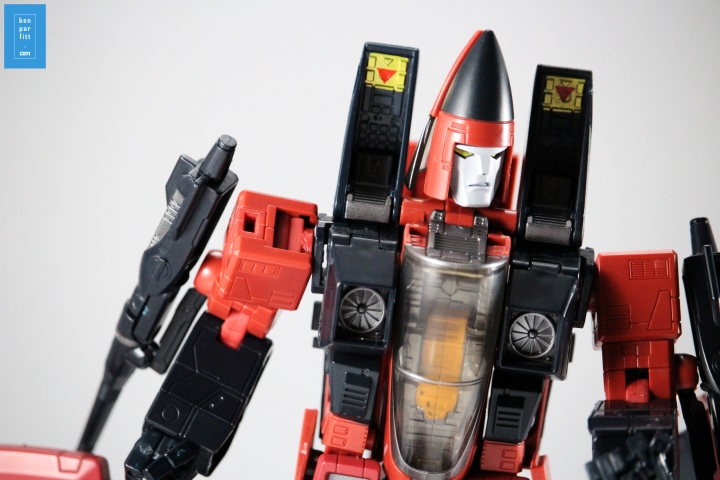 In fact, the whole bot feels more sturdy than Ramjet. It took me a while to warm to the first conehead, I’ll admit. I think perhaps my familiarity with the seekers made the additions and changes to the mold feel a bit odd, making the existing model do something it wasn’t ever really designed to do. I also thought there was something off about the plastic. I grew to like him in time, but from the off Thrust feels better in hand. The plastic actually reminds me of that used in the KO Red Bape MP-10, although it’s a far better finish, I think possibly as it’s thicker. I fully agree that the cartoon-authentic knee colours seemed ghastly in early pictures, but in hand they work really well. And that face sculpt. Glorious. The wings are better handled this time, too, with improved tolerances and a simpler journey between configurations.

The transformation feels very smooth, actually, and the jet – as you’d expect from an MP-11 figure – is tremendous. Is this the best jet in the entire line? Yes, I think it might be. It’s a triumph. It’s huge, it’s sturdy, it tabs in brilliantly. I can’t fault it. Plop him down next to Ramjet and it’s a sight to behold. The new foldable null rays give him some extra undercarriage armoury, too, and is a really nice touch. 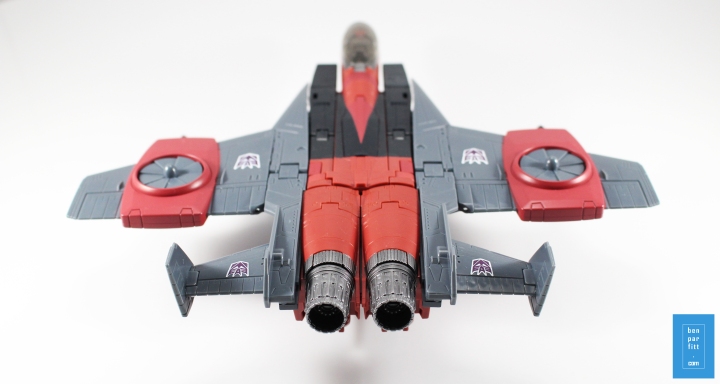 Problems? Yes, of course. The waist, as I said, should never have been allowed to happen, but is as simple a fix as you can hope for. Mine has a chipped nose that really grates on me, although when on the shelf and not under the bright lights of close photographic scrutiny is in truth quite hard to spot. The rear of the bot remains a bit of a mess, with lots of hanging bits that tab into nowt, and one of my null rays likes to pop off its ball hinge a little too readily. Oh, and how ridiculously big is that box? Honestly, Takara, making the MP-11 boxes a consistent size achieves absolutely nowt. Shrink it, for the sake of the environment if not my postage charge. 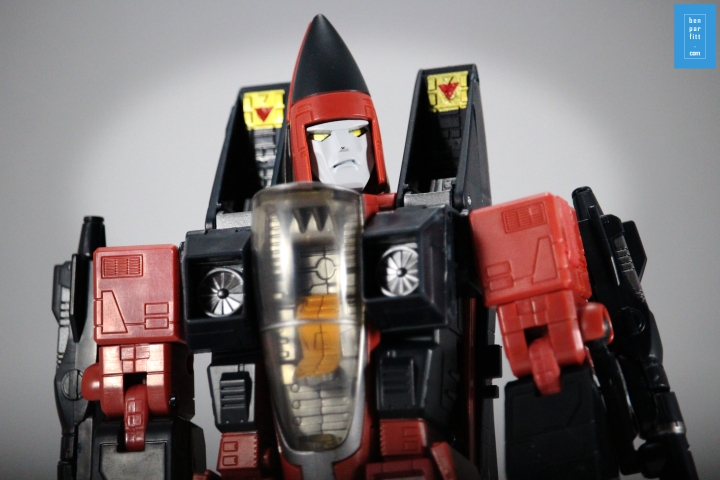 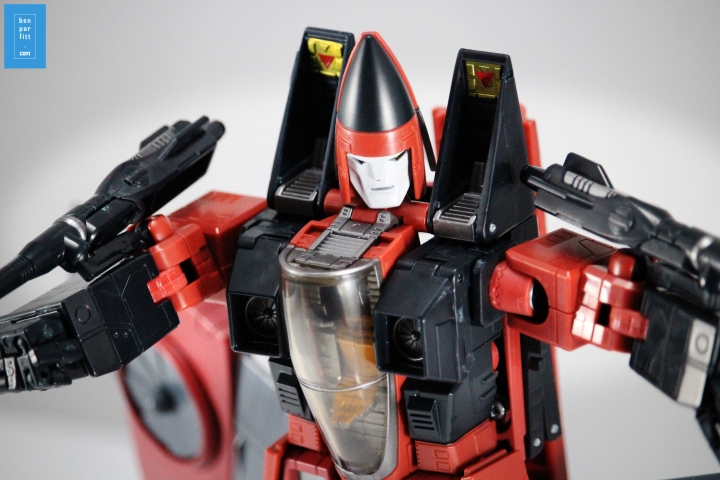 But this is where we get to the nub of it. Thrust is too expensive, as was Ramjet and as will be Dirge. He’s not perfect by any stretch. The lack of ankle tilt remains a problem for the mold, and the lack of waist swivel is a shame. But I love him. I absolutely love him. I’ve not seen a picture of a KO or 3P rival yet that comes anywhere close. And I’ll pay out for Dirge, too. Sigh. 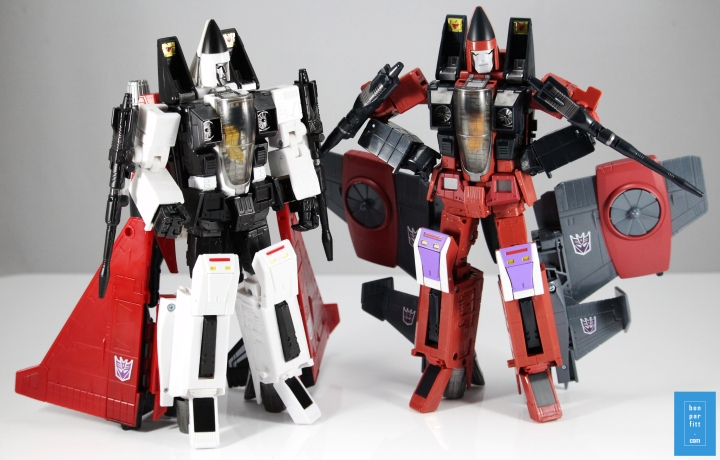 Is this why Takara can afford to charge too much for its product? Are buyers like me part of the problem? Yeah, possibly. But as much as I love third party figures, the lure of the official is true and endures. Had I not already had five official seekers in my collection prior to the arrival of Ramjet, however, I could quite conceivably have chosen to build a KO seeker collection instead. If the bots are better (and that’s still an “if”) and cheaper, why wouldn’t I? I’m a toy collector, not a brand ambassador. I don’t have Hastak tattood down the length of my cock (they got as far as ‘Has’ and ran out of room). But this far down the line and now with just one more bot to go, I’ll be paying through the tooth for Dirge. And I know that I’ll love him.

If you’re not a fan of Takara’s MP-11 series then Thrust will do absolutely nothing to convince you otherwise. The rear, the knees, the waist – it’s all as was. And the good news is there will be plenty of alternatives. If you’re an official seeker collector, however, Thrust will be a delight, complete with all the failings you’re already entirely familiar with. When Dirge arrives next year the three coneheads are going to be a high point of your collection. Let’s just hope that Takara can get the QC right with at least one of them, though.