We all have our own little rules to help keep our collection in check. For instance, one of mine is ‘Make Sure You Can Afford To Feed The Child, OK You Cash Spunking Thundertwat?’ I’ve so far managed to stick to that one. Go me. 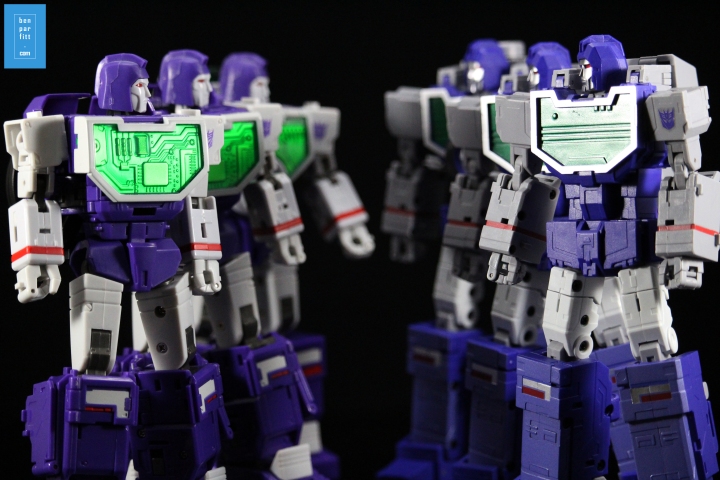 One of my other very strict and not to be broken rules that I’m starting to waver a little bit on, however, is the ‘Only One Version Of Any Character In Masterpiece Scale’ rule. Optimus Prime is the exception, it should be noted. If it’s Optimus it is welcome on my shelf, as my twelve MP-10’s will attest to. But recently Optimus hasn’t been alone in this dirty little club of subversion.

I bought MP-29 Shockwave on the very strict condition that either he or Fanstoys Quakewave would remain. Takara’s bot got the space on the shelf, and Quakewave was listed in my sales thread and twice the subject of a proposed sale – but I never managed to part with him. So he now sits quietly at the back somewhere out of sight and out of mind like that grandparent you stuck in a home in the Hebrides.

I did get rid of Apollyon, but Mightron still remains despite Despotron very much being my top pick. And we have the official v2 Megs on the way next year, of course. More trouble lays ahead, too. I love Generation Toy J4zz, but did you see those Maketoys Downbeat promo picks? That was him pre-ordered on the spot, so that’s an issue waiting to be resolved. I’ve had Visualizers since launch and am largely happy with them, but a couple of irritations have always had me gazing ponderously at the competition. Obviously KFC’s bot was out of the question – why would you buy a Citroen when there are perfectly affordable BMW’s and Audi’s on the market? I dunno, maybe KFC Opticlones are great (and to be fair I do think their bot modes looks very nice indeed), but I’m not dropping cash on them to find out. Unless you’ve seen them on sale somewhere? NO BEN. NAUGHTY BEN.

However, when a chance cropped up to grab Fanstoys Spotter at a very good price I couldn’t resist. I would simply sell one of my sets after I’d decided which I liked best. Easy. That of course has proved to be a complete fucking nightmare as over the course of several transformations back and forth with the pair I’ve found it really, really difficult to choose between them.

One shall stand and one shall fall, right? Right. So which is it going to be? Maketoys Visualizers or Fanstoys Spotter?

Of the two I think you find most of the clever touches with Visualizers, most notably in the way they ingeniously incorporate the camera lens into the robots themselves. That process is maybe one of the fiddlier aspects of the transformation, but the lack of partsforming is a huge plus. Spotter certainly feels more solid, but Visualizers are probably more posable. Also note that on Visualizer there are 13 visible screws in the central bot and 14 on each of the other two, a lot of which are well hidden. On Spotter there are 32 on the central bot and 36 on the other two. And they’re right fucking there in your face. I also love how all three Maketoys bots are designed to look the same when one is actually built quite differently. It’s very clever. This round isn’t much of a contest, really.

If Design was cut and dry one way, then this it is equally as clear a victory the other. Spotter is a far better likeness for the G1 model, in both modes. That’s not a criticism, as such. Maketoys is more prepared than most companies to stray from the source and offer its own interpretation of a character, and that’s exactly what it’s done with Visualizers. But nonetheless it’s certainly true that Spotter – in terms of shape, form and colour – is more the Reflector you remember. If indeed you do remember him as he was such a non-character. 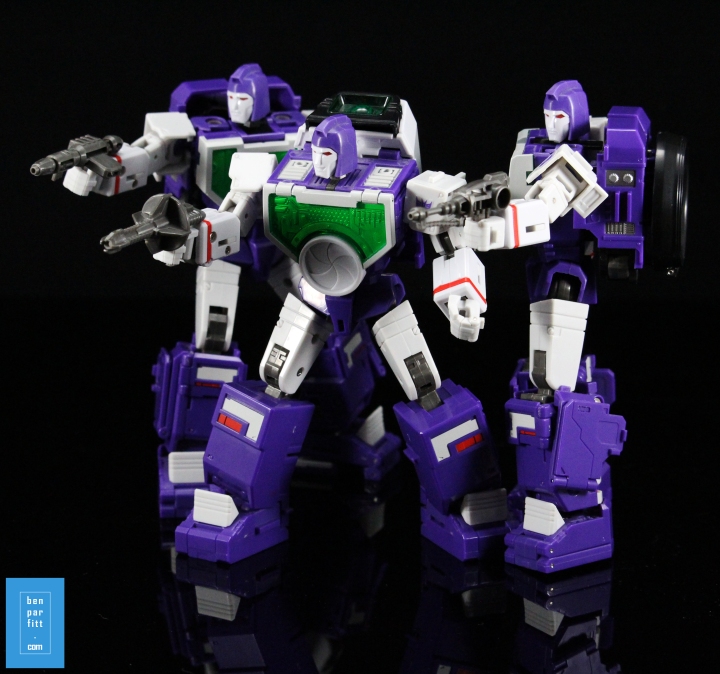 On the subject, what Visualizers lack in authenticity they make up for in personality. They look like a right cheeky trio, and very much the sort who you’d stumble in on in the morning thieving baubles from your Christmas tree or spiking the cat’s water with vodka. Maketoys’ lot might as well be called the ‘The Likely Lads’. Three pints of Snakebite at last orders. Spotter, on the other hand, is more likely to be caught in the corner scratching its arse and sniffing it, Joachim Low style. They wouldn’t read sci-fi as they “don’t see the point” and probably support Millwall, although really they prefer watching rugby league. Sun readers.

It’s probably not a shock to hear that the bots with the most character are also the most fun. I found it a lot easier to get dynamic poses out of Visualizers, and the fact that the lens is incorporated into the bots themselves massively opens up the play potential. Spotter’s crotch flaps are so tight that forcing them open just to pose him becomes a drag, whereas Visualizers just beg to be fiddled with. While Spotter feels built for posing like a ponce, Visualizers feel like they’re made to be toys. There’s just more life to them.

I like the way that Visualizers attach to one another, and I like the integrated lens, but sadly it’s the camera mode that really lets them down the most. It doesn’t look authentic and it doesn’t look very good. Yes, there is some extra detailing here, and the real-life tripod stand is cool, but in-hand it all just feels a bit naff. I find it impossible to stop handling Spotter in camera mode, however. They just look so great. Yes, having to partsform the lens is nowhere near as clever as Visualizers, but the end result is so much better. The easiest decision of the lot, this one. These things will spend the vast majority of their lives sat on my shelves, so how they look with their Decepticon brethren is a big deal. In truth both have their faults. Spotter is noticeably gappier with holes and panels lines and screws everywhere. I really wish their green chest panels were more vibrant, too. At the same time, they looks badass, and the scale I think is just right. Vizualisers look cheeky as, and as sculpted bots they stand out – especially with those gorgeous green chests. Lots has been said about their ‘swimming cap’ heads and as much as I hate to jump on a forum bandwagon, people are right – the head shape is off. The knees are a bit fiddly, too. What annoys me most, however, are the loose shoulder covers, which to me are one of the most bizarre and disappointing design decisions ever made. That’s probably the one thing that always meant I kept an eye on the Reflector alternatives, it fecks me off that much. But which looks better in the Detolfs, though? 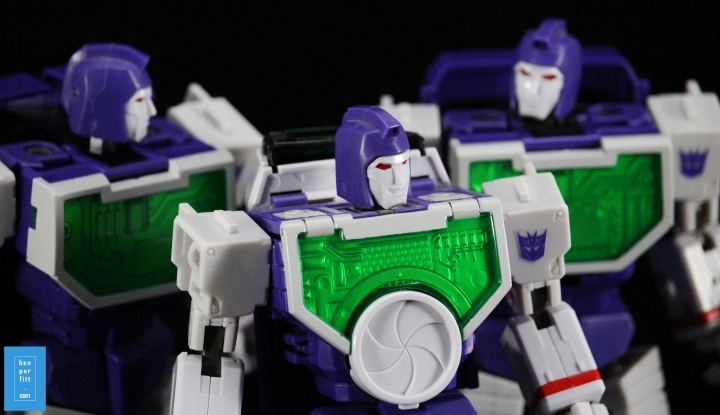 I pretty much hated life when transforming both of these the first time out. Both have strengths and both have weaknesses and it’s only really in the last few days when I’ve gone through both transformations repeatedly that it has even begun to approach being a fun experience.

With Maketoys, folding the central bot up was a living nightmare at first, although I’ve come to realise that doing each leg individually before joining them together makes things a lot more tolerable. There’s also some fiddling with panels on the side that I don’t much enjoy, and I’m still unable to unclip the purple segment of the central bot’s chest without a tool – something that especially irritates me. The lens is a joy to transform when going into camera mode but definitely less fun when folding back into the bot. The trio attach easily and firmly, though, and transformation back from alt to bot is a breeze.

With Fanstoys, it was folding the legs that was the killer. However, once I’d eased the screw in the thighs a full turn or so everything became so much better. I shall never understand what the fuck the designer was thinking when it comes to the backpack, though. That stupid part that needs twisting and always comes off the clip is baffling and I can’t for the life of me see why it was designed that way, especially as it servers virtually no purpose in bot mode. I’ve taken to not even transforming it back as it just hangs there redundantly anyway. Those issues aside, once the order of things is clear in your mind, and some of the tights panels have loosened a little, transformation actually ends up pretty OK. And guess what? The final time I did it I was able to do so sans-tool.

Winners: A close one this, but Spotter 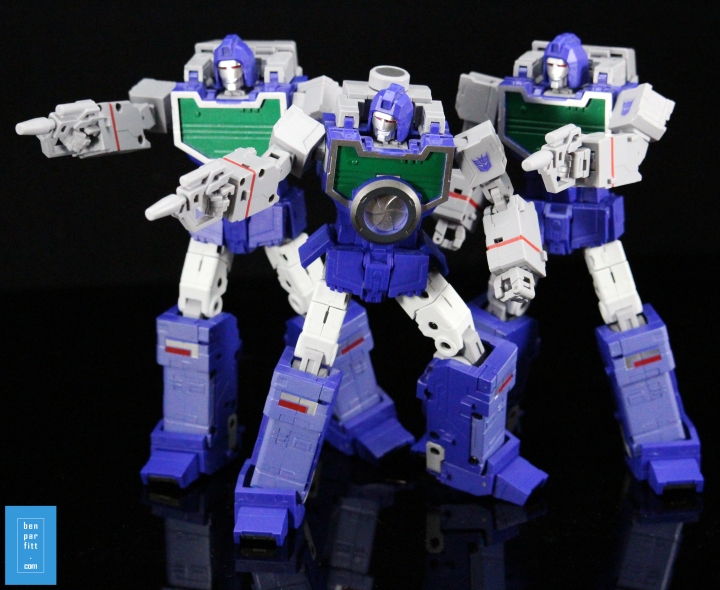 The main thing to take away here is that you can’t go wrong either way. Both bots are great. Both have their flaws, too, so it really comes down to what’s important to you. If your main criteria is something that looks like the cartoon, Spotter is an easy win. If you want something with a clever transformation and a lot of character, Visualizers are your best bet. If you want all of those things, like me, then on balance I’d just – and it is only just – lean toward Spotter.

I think. I’m still not 100% sure. But yes, Spotter. I have to sell one, though. I have no choice. It’s completely out of the question to keep both. Nope. No way. No siree. Not even if one of them is hidden quietly in the new study we’re going to build and kept away in its own little collection therefore in theory not breaking the rules of my main collection. Nada. No can do. Not on. Nah. Not an option.