I like to imagine the now time-rich George Lucas returns to the original trilogy alone in his mansion’s editing studio now and then and does all sorts of wacky shit. Far zanier than chucking in some CGI spaceships, fucking up the Ewok song and, I dunno, giving the Sarlacc a bowler hat. I mean really drastic shit like, removing the opening crawl and, erm, perhaps even ditching the opening Star Wars sting entirely. Then he cracks open a 7Up, sits back and violently swears while imagining all the fanboy tears.

Rogue One gives you a taste of this, though, by doing exactly that. Well, not exactly that – there isn’t a mustachioed Sarlacc or anything. But there’s no crawl and no Star Wars sting. In fact, Rogue One is very deliberately unlike other Star Wars films, both in presentation and tone.

It’s kind of pitched like a grown up Star Wars, albeit a grown up Star Wars cleared by the BBFC for 12 year olds. But at its core there are lots of fundamental differences. You’ll get no 3PO or Jar Jar here. Instead our comedy droid draws laughs through morbid fatalism. Our introduction to Cassian Andor, for instance, sees our ‘hero’ murdering a dude in cold blood. We also see a Stormtrooper getting shot point blank in the head because, y’know, Rebels can be bad too.

The premise is in your face from the off – war is shite, and shite things happen in war. Luke and Leia may get the headlines as they ponce about exchanging curt words with the admiralty, but it’s the piss munchers getting laser beams up the arse that actually get shit done. 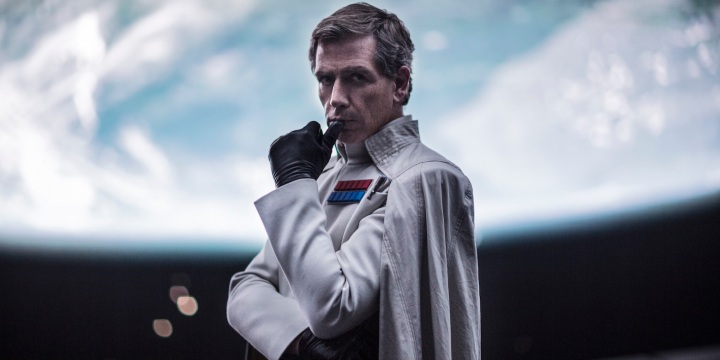 A lot of which is sadly lost among the confused and quite unenjoyable first third that sees us hopping briskly between planets we don’t recognise tracking characters we don’t know. Despite the fact that things improve considerably in the second act and pick up further as things progress, you’ll struggle to give a toss about any of the core cast, sadly. We’re told why we should care but never shown, and as the central posse seem to give so few fucks themselves at times, Rogue One never connects with its audience in the way that Han or Luke (or Rey, or Fin, or even Vader) do.

The makers perhaps hoped to bridge this gap with plenty of cameos, not least from Lord Vader himself. He crops up twice, and sadly his introduction is tepid. It even ends with a quip, of all things. Fortunately his reappearance delivers a frankly epic set piece where our favourite Sith kicks seven shits out of an entire corridor of Rebel scum. That the sequence is one that runs into the immediate start of A New Hope not only adds feels to Rogue One but also, on subsequent viewing, the original Star Wars itself. Vader’s famous debut at the door of the Tantive IV is all the more chilling set to this backdrop of utter fucking carnage.

The plot is fundamentally sound and I did like the main conceit of making the Death Star’s seemingly bizarre structural weakness the central thrust. It reminded me in some ways of JK Rowling’s Cursed Child, or Moffat’s work on The Day of the Doctor and The Time of the Doctor – all felt like good fan fiction, where strands and threads left dangling by the main story were embraced and run with. Oh, so there’s a reason why the mightiest machine in the galaxy has such a baffling safety loophole? That’s actually good to know.

It does, however, make the fact that Death Stars II and III ALSO have crippling design flaws even more bizarre. I mean, you’d expect construction projects of that size to suffer technical hitches. I reckon a visitor to any Death Star canteen will hear familiar complaints about the unreliable lifts on the lower decks, the patchy wi-fi in the upper stern quarters and the poorly conceived catering management provisions in the drive section. But technical issues that now routinely lead to the entire explosive destruction of moon-sized space craft? Shoddy.

Less sound is some of the meandering we endure to get to the ultimate point of it all. Jyn Erso and her father Galen Erso provide the most obvious and emotionally resonant arc, which is far more than can be said about Saw Gerrera. Just why exactly was Forest Whitaker here at all? His only purpose seemed to be yet more heavy handed hammering home of the point that the Rebels can be shady fuckers too, and that war makes good folk do bad shit. But it’s a point we could have easily grasped without the excess fat Garrera lumbers us with, which is perhaps why he oddly chooses to just let himself die – coincidentally at the point where the film finds its feet and starts dishing out the good stuff.

Ip Man is cool as fuck – a Force sensitive chap who may well had been a Jedi had any been alive to train him. I loved that little bald dwarf saboteur dude and while I’ll pick R2 or BB8 over K-2SO any day of the week, the droid’s comic relief is absolutely welcome amidst all the doom and gloom and murk of Rebel struggle. There’s nowt murky about the shiny plasticine oddness of Grand Moff Tarkin, again played by Peter Cushing. Who is dead, of course, meaning the Moff is fully CGI. Star Wars has pioneered the use of CGI characters, making the Moff’s rubber faced uncanny valley rollercoaster all the more disappointing. Still, it’s a master class compared to the closing cameo of young CGI Leia which, I think is fair to say, is horrifying. It would be heartbreaking, considering tonight’s news, were this to be Fisher’s final screen appearance. May the Force let it not be so.

The action, however, is horrifying for all the right reasons. The Death Star’s destructive prowess is a masterclass in special effects, and in general all the action sequences are absolutely top notch. The closing battle on Scarif, in particular, is awesome, complete with AT-ST and AT-AT arse kicking. I just loved the moment that Baze Malbus’ rocket is shrugged off by the series’ most swag AT-AT. In fact, for Star Wars devotees there are dozens of sweet moments where the familiar is given an original enough spin so as to successfully play off your nostalgia.

It’s slightly odd, though, that while the Rebels are by design a cast struggling with muddied motivations and conflicting morality, the Empire is actually governed by a more clearly defined moral code. While the Rebels bicker among themselves as they try to conjure up a plan to confront what effectively boils down to ‘da man’, the Empire is, even if misguided, effectively trying to quell extremists and instill some goddam law and order – and sharp fashion – to the galaxy. Orson Krennic may be a slave to his insecurities, but at least you grasp why he’s doing what he’s doing. Basically he wants a promotion, and doesn’t want the Moff’s rubber-faced doppelganger stealing his thunder. He rocks a cloak, too. Fair play.

The thrust of the story – hope – is certainly laboured. The point is made SO MANY times. But Rogue One does do an excellent job of fleshing out a story we’ve all known for as long as we can remember, and does so without cheapening it. A New Hope is a richer experience off the back of it, and that is a whopper of a compliment. And you know what – I loved that it had the balls to draft in Bail Organa, acknowledging that the prequels actually exist. Props.

And it’s hard not to see deeper meaning in Jyn’s predicament in light of the absurd alt-right rejection of the film for having the audacity to cast an actual woman, too. Like women will ever make it into space! That’s just stupid. We all know there won’t be room on the spaceships because of all the war teddy bears, space wizards and gangster slugs. In Jyn we have a woman who is largely disinterested in the politics of the galaxy, but is forced to confront them when she realises that her inaction will have disastrous consequences. One must hope that her change of heart is mirrored in the world of 2017.

Rogue One is not Star Wars as we know it. And thanks to the slaughter of the entire cast, it’s not the future of the series either. What it is, though, is proof that Disney isn’t going to shy away from deviating from the formula, and if it wants to churn out a movie a year, that’s exactly what it has to do. The Force Awakens is a far purer experience, but there’s room in this galaxy for the kind of side orders Rogue One brings to the meal. And while it dares to be different, it never betrays the spirit of the series. Let’s just hope the next spin-off has a sharper first act. 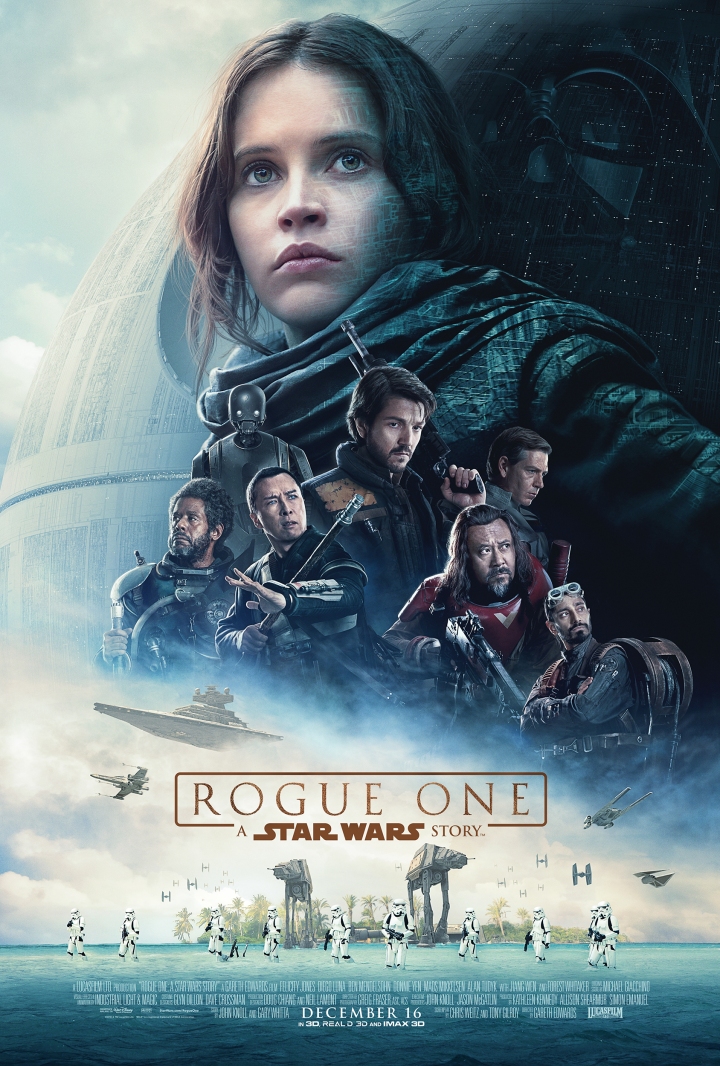