My experience with Toyworld until now has been limited to the recent not-MP10 Primorion, which arrived in my early 2017 downtime and thus avoided review. But I’ll tell you now, I wouldn’t have been especially kind. Both modes look great, but the transformation is just horrendous, and there’s an inherent awkwardness to the bot. He would have been 3 stars, max. If he were any character other than Optimus he’d be off my shelf. So it probably goes without saying that my expectations for Spaceracer were tempered at best.

Which may possibly have played a part in how absolutely delighted I am with him. Don’t get me wrong, he’s a complete wrong ‘un. He’s utterly bizarre. In fact, if you’ll indulge me for a moment, I’d even go as far to say AWWWW HES SUCH A CUUUTIE 😊

Out of the box, and even a few hours in, I still didn’t really know what to make of him. He has a really distinct feel, which can work against a figure when it’s going to be joining a wider line-up, but somehow Spaceracer completely pulls it off. And I think when you’re aping Cosmos –  green and yellow Autobot who turns into a 1950s style saucer UFO – you can get away with a little madness. He definitely fits in alongside the likes of MP Bumblebee, XTB Arkose and Badcube Grump.

Proportionately he’s probably best described as a chunky monkey. This rotundness is exasperated even further in alt mode. Some might be put off by his proportional deviation from the source but in hand he’s a real joy. I do like a solid alt, and you could club a small seal or human child to death with this one quite happily. 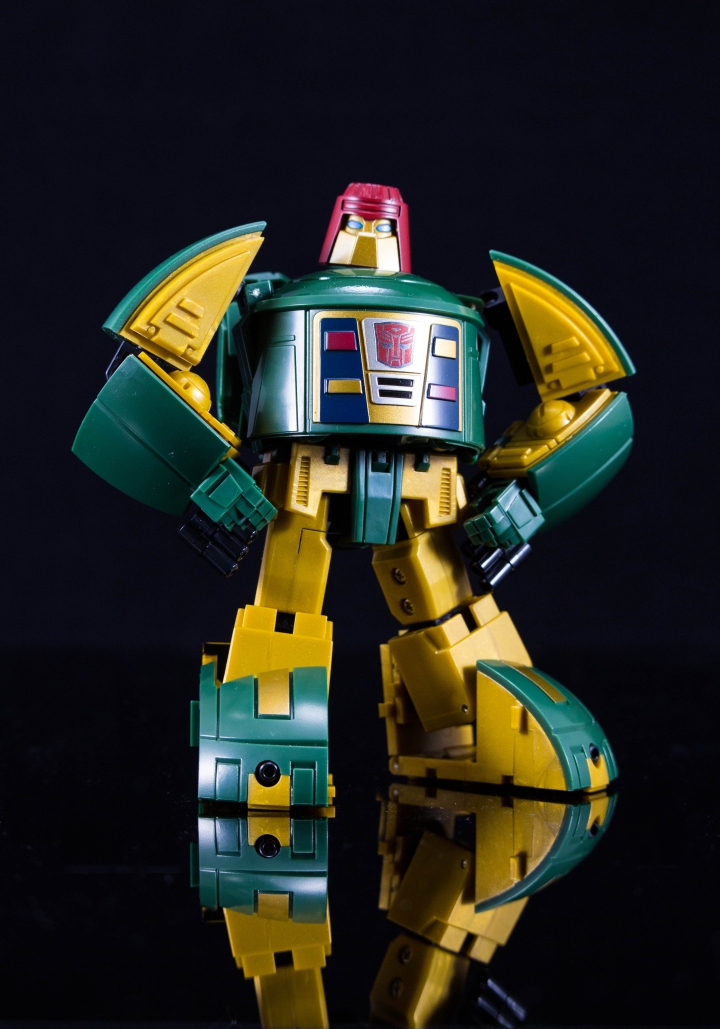 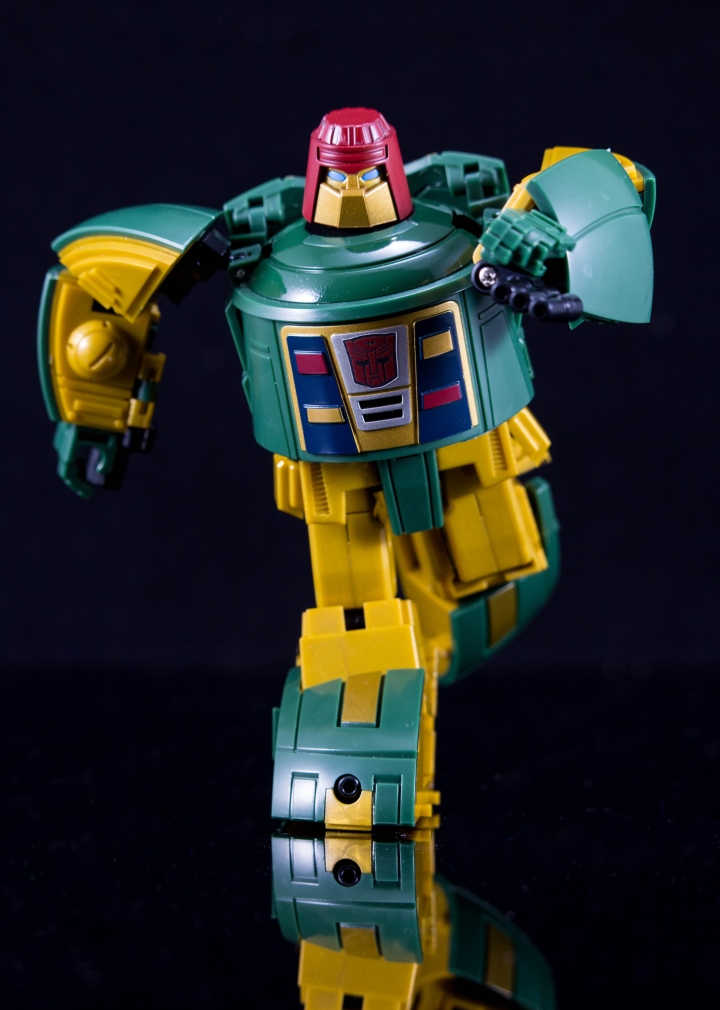 In the box you’ll find a panel for Toyworld’s new chainmail ‘build-a-base’ collection, and I think it’s a great idea. Added to the two that came with Primorion it’s provided my desk with an awesome little Ark-style display stand, and I’d be lying if I said the idea hasn’t made me more inclined to look again at the company’s future output, as I’d dearly love another, say, six panels. If only they’d sell them individually! But one suspects that would defeat the point.

Spaceracer also includes an orange stand for display swooshing, for which you are required to use a tiny attachment that – *gasp* – involves a little partsforming, at least if you want to keep it attached to the figure at all times. But it’s miniscule and it works and it’s optional and seriously who can’t deal with a tiny bit of partsforming? What isn’t in the box is a weapon. Instead, the wee green scamp uses a pair of wrist-mounted guns that double as exhausts for the saucer. It kinda works. Well, it does work, but would I have preferred those parts to hide away and for him to have a dedicated weapon instead? For sure. 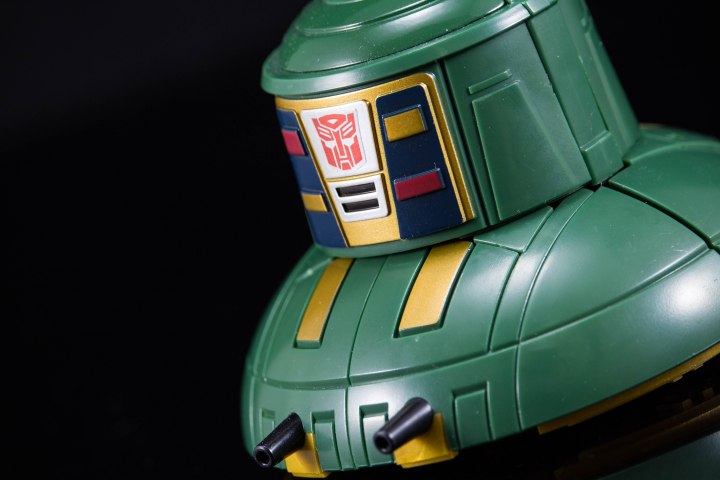 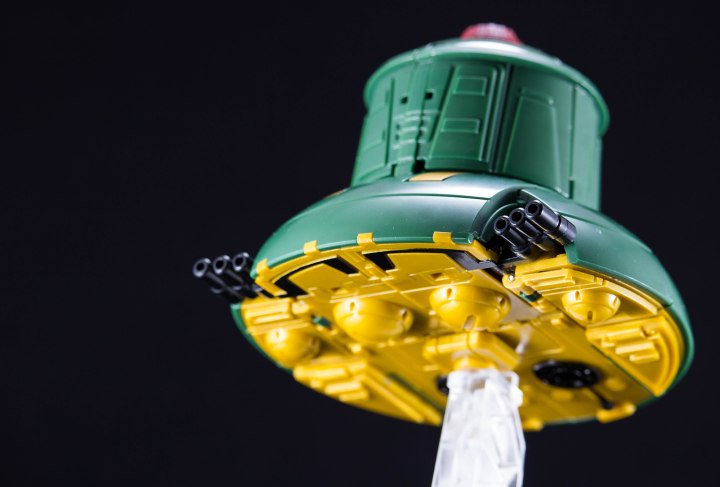 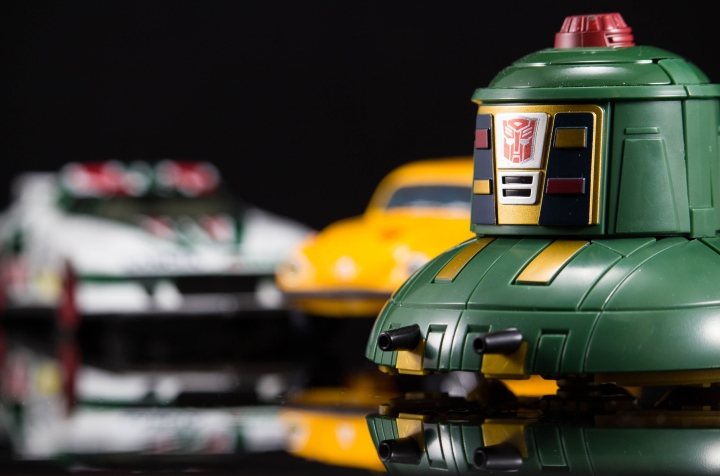 Posability is surprisingly decent, with some caveats. There is bicep swivel but dear me it feels awful! On my copy one arm has the most horrible creaking, with a stuttering movement that feels like it’s shattering something inside (although I don’t think it is as a week in or so things are exactly the same). The other arm doesn’t creak, but the movement still feels dreadful. That aside, he really is just some forward ankle tilt away from being amazingly posable. It’s such a shame! But even without it, the brilliant outward tilt and decent inward makes for some great stances.

My other main complaint is the head twist. I don’t mean the neck joint, which is really good and allows for a decent range of movement. Out of the box his eyes were proper wonky and it was only later I realised that there was a face twist gimmick to switch between two different sets of eyes. The problem is, the mechanism is stiff AS FUCK. That scratching you see on the photos? That’s a result of my trying to get the fucker to move. I needed a tool and everything, and I mashed up the plastic in the process. My advice? Leave it alone, although the eyes that were hidden by default are unfortunately the better choice. 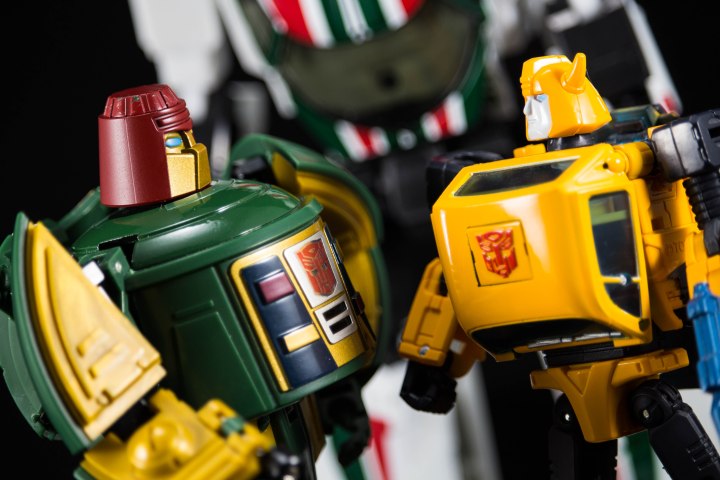 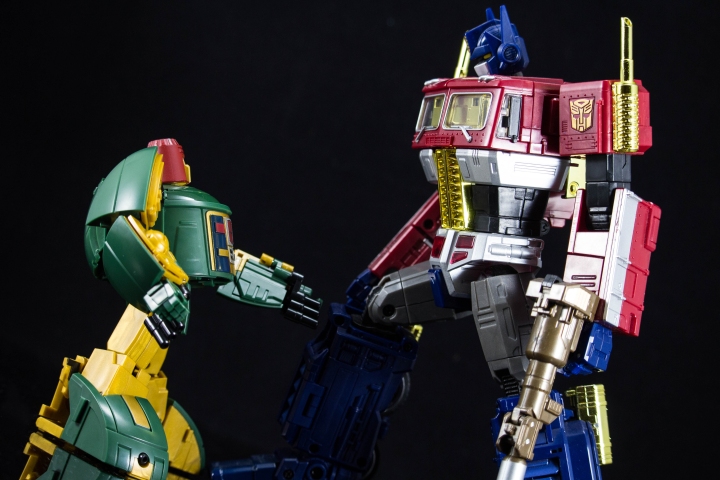 Tolerances elsewhere are better. The leg transformation and collapsing feels just right. There are also two panels that swing up from under the gut that are beautiful, feeling at first like they’re too tight to budge but actually moving with a deliciously smooth resistance once they get going. There are a couple of very small panels that swing up from the back section that will come flying off if you transform him in the wrong order, though, so be careful – they’re super tiny and easy to lose. I’d also like the nub that secures the swinging arm assembly to be a tad bigger, although it holds a lot better than it looks like it should. Let’s hope it doesn’t wear down over time.

The transformation is great, although you’ll need to make sure you nail the correct order. You’ll also need to pick up a couple of tricks not in the instructions, like turning him at the waist before raising or lowering the arms. It’s very self-explanatory though and after a couple of goes you’ll be breezing through it in a minute or two. Lining up the arms in saucer mode is something I’ve not quite mastered, however, although it can definitely be done. I think the trick lays in making sure the hands are folded away properly and the black arm bracket is in the right position. Still, as 3P Masterpiece transformations go this is a resounding winner.

So, two great modes and a great transformation? Spaceracer ticks virtually every box. Really, he’s only a couple of QC niggles (biceps, face twist) and a forward ankle tilt away from top marks.

I can see why some people dismissed Spaceracer on the strength of the pictures. In truth, I only picked him up because the alternative was X-Transbots, and there few circumstances where I’d go XTB if another option is available. But the in-hand experience is really quite fantastic, and I love him in both modes. Spaceracer has that rare quality about him where I found myself taking him around the house wherever I went. It’s hard to be a decent Masterpiece and a top-class fiddlebot, but Spaceracer pulls it off. He’s a real cracker who I don’t hesitate to recommend. 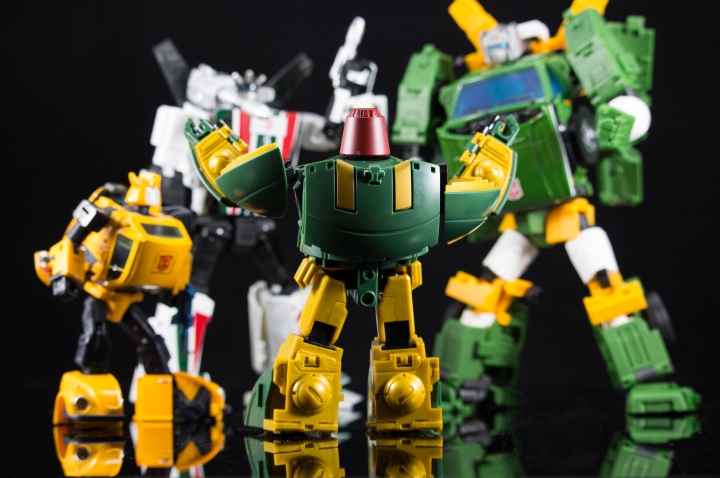