I know lots of folks who are very deeply down the third party Legends scale rabbit hole. It’s all pretty much new ground for me, however, so when Kapow offered to give me a set of DX9 Coneheads to review I honestly had no idea what to expect.

My sole experience of this scale to date is Iron Factory’s Ultimate Commander Optimus Prime and, I’ll be honest, I don’t like it all that much. There’s lots of accessories for good fiddle-bot potential but the robot itself is irritatingly hard to pose, the vehicle mode is poop and I don’t like the feel of the plastic one bit. However, I know plenty of good people who love him so I’ve always chalked it down more to my personal tastes than a problem with the figure itself.

I was pleasantly surprised, then, to discover that the DX9 trio pretty much address all of these complaints. They are surprisingly posable, they all pack two great modes and the plastic feels absolutely great. If you’ve handled any of the DX9’s Masterpiece bots, it feels like the same stuff, and I’ve always been a fan. 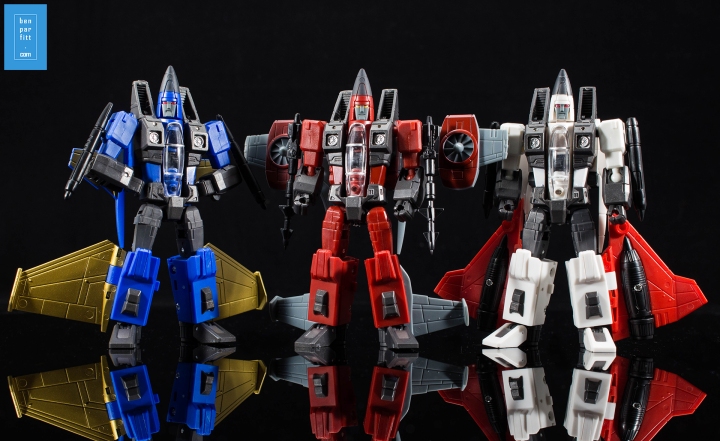 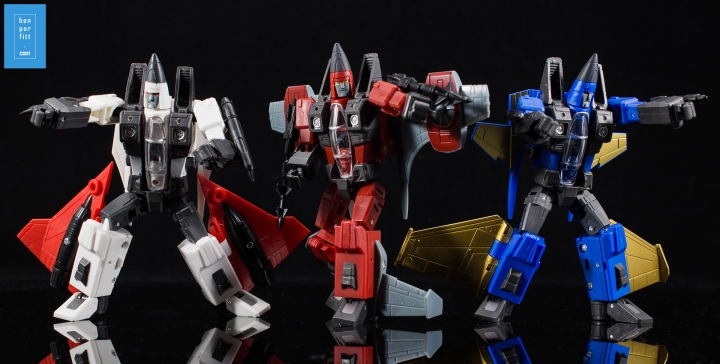 I’m aware that my reviews can be quite formulaic in that if I like something I’ll get the negatives out of the way first and then let the fapping commence. If I don’t like something, I’ll dish out whatever praise I can and then let rip. So however the next paragraph begins should clearly signal the direction in which we’re heading here. 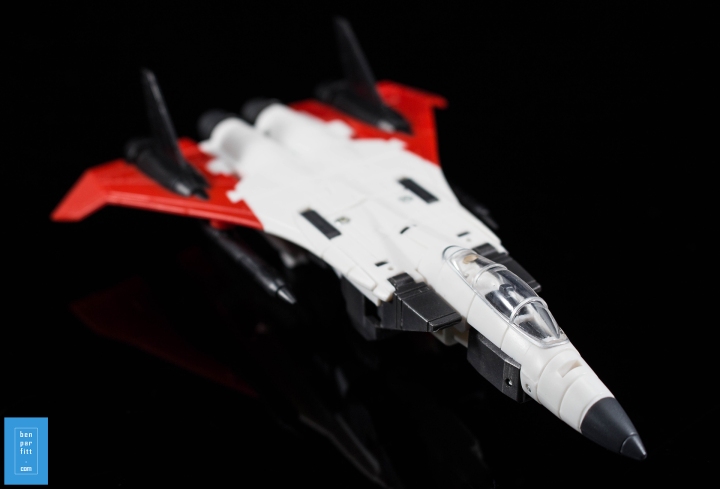 The negatives, then! And honestly, there aren’t many. The main one would probably be the sprucing, which is by no means awful but is definitely noticeable. I presume that the smaller a figure gets, the larger the capacity for sprucing to intrude, as the marks themselves will be proportionately bigger. But really, there’s not much to worry about – Thrust had a little sprucey poo dangling from his crotch, and the shoulder intakes are a little untidy on Dirge. In fact, the shoulder intakes on all three lack the sharpness found everywhere on the figures.

It’s also a shame that the drill hole for the pin that attaches the shoulder is so clearly visible, but then as the torsos are solid, the only way to address it would be to plug the holes, and that would be a manufacturing nightmare, I’m sure. I’d have also liked a better match between Thrust’s red paint and his red plastic. On Dirge, too, the gold paint on blue plastic doesn’t glisten in the same way as the molded gold wings do, which is a shame as the wings look great.

While the tolerances are generally good – in fact, no, they’re excellent – Dirge has an ever so slightly loose leg, while the arms on all three are a little tight around the elbow. In fact, transforming the arms takes a surprising amount of force. I assure you, though, I’ll take a little tightness over looseness any day, and I never felt than anything was going to break. 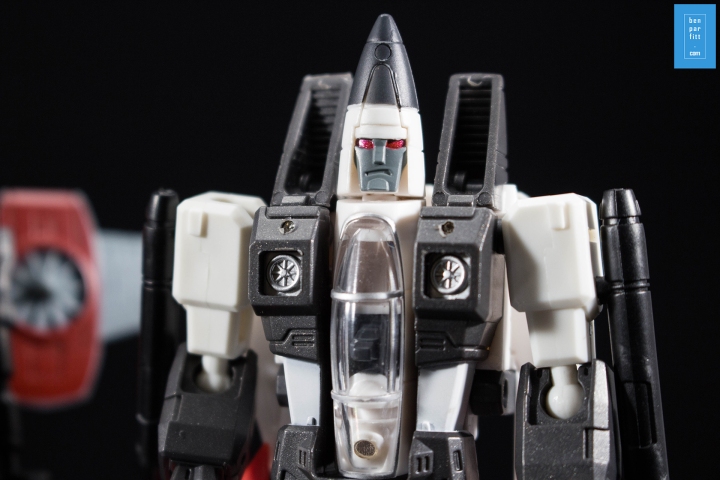 What else? Well, while the design of the transformation works perfectly for Thrust, whose wings are raised on his back, it leaves Dirge and Ramjet with slightly unsightly backpacks. This means they don’t look great from behind. But then, nor do I. In the grand scheme of things this is a minor complaint, and honestly I expected far more in the way of compromise for figures that are so small. 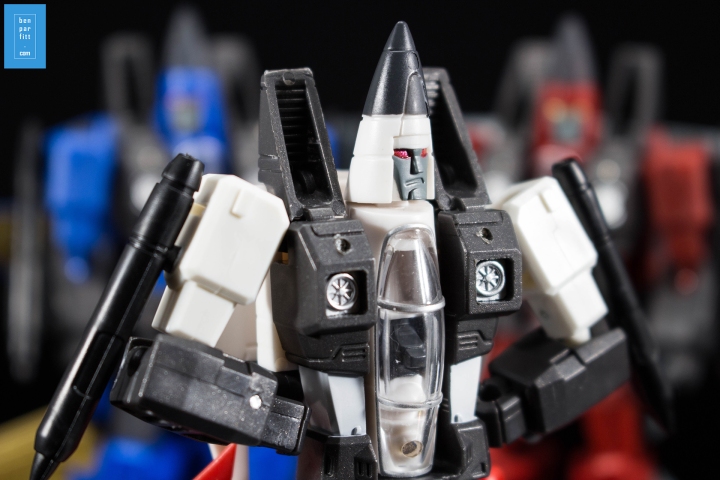 In reality, there’s very little compromise at all, in fact. Not only do the robots look great and pose surprisingly well, but the alts are fantastic too. DX9 does a great job of making each feel individual. The transformation, as I guess you’d expect from such small bots, is simple, if a little fiddlier than I’d expected. You need to do things in the correct order to avoid any clash of the arms and rear panel, the shin panels are super stiff and, as mentioned above, the arms take some work to position correctly. I’m not sure if there’s too much joy in getting them from mode to mode, but nor is there too much pain. Some people may complain about the underside, where a clearly visible forearm protrudes. You can’t escape the fact that all three point their noses up a little with the landing gear deployed, too. None of this detracts too much from the overall very solid jet modes, however. They’re a great size for swooshing, too. 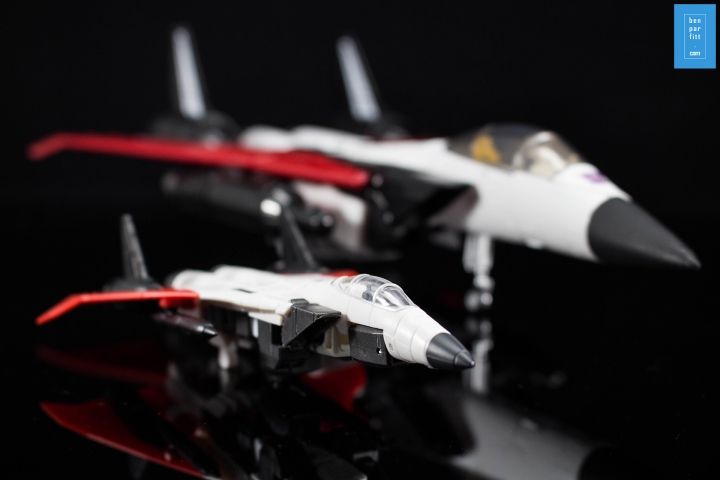 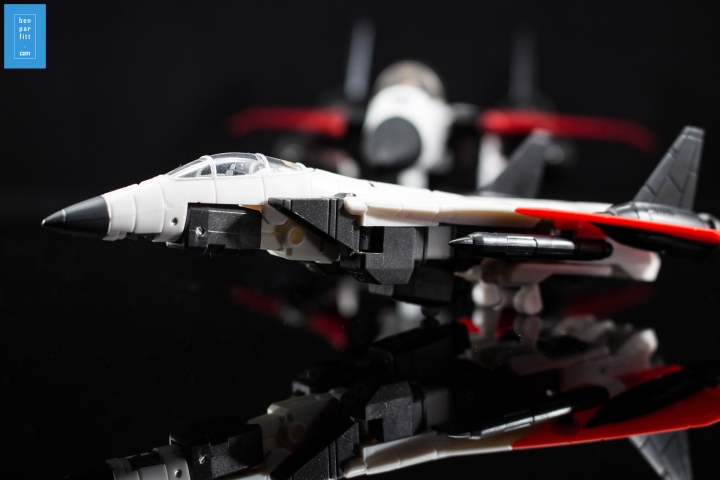 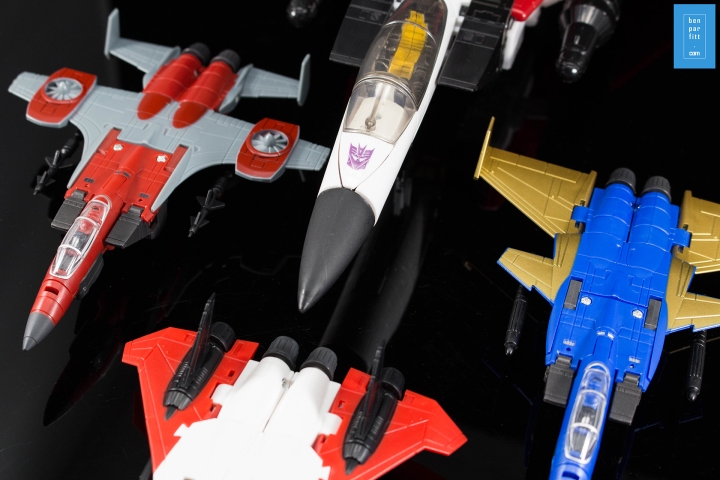 Actually, scanning back over all that now I’m quite surprised how I’ve found so much to complain about, because overall all three are very tidy indeed. The biggest highlight for me is just how much character you can get from the bots. This isn’t due only to the face sculpts, each of which is different (and boasting lovely bright metallic eyes), but also because those tiny legs and arms can do quite a bit. If you’re not careful the bots can be a little back-heavy when posing, and you sometimes have to ‘plant’ the feet firmly to make the exhaust and foot form a solid base. But it all works nicely, and as a trio they look terrific together.

The tolerances put Hastak’s Legends scale stuff to shame, as does the solidity. These are chunky guys who I’m sure would happily hold up to repeated and rough play. What clicking and tabbing there is during transformation works beautifully. At the same time, the attention to detail is there – the chest intakes, Thrust’s wing intakes, the faces, the eyes, the clear canopies. It all impresses. Of course compared to larger figures they are relatively simplistic, but I think the finish is perfectly befitting of the scale. 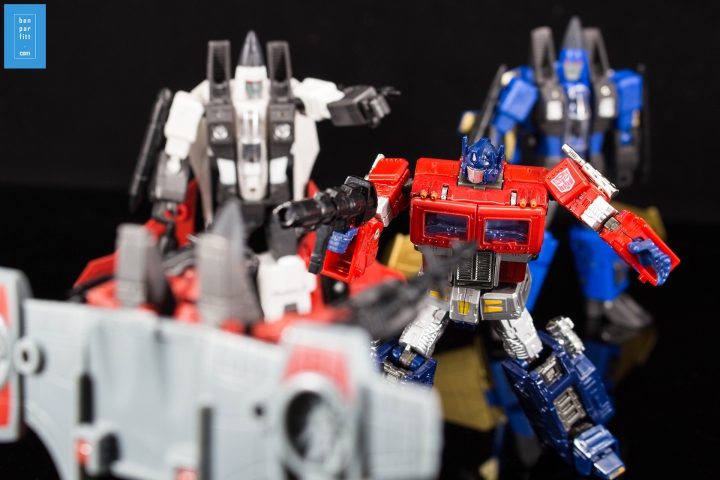 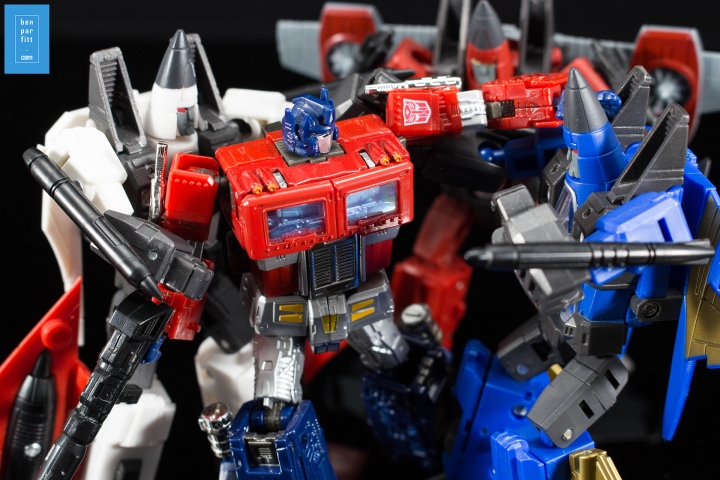 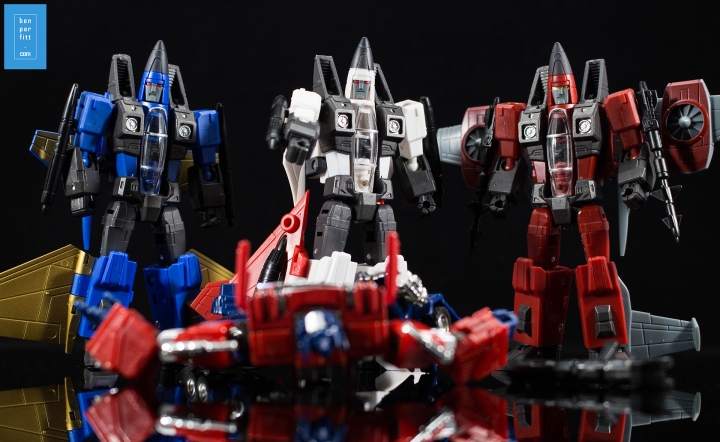 Don’t be put off, either, by what appears to be untidy paint in some of the pictures. Remember that these were taken super close with a macro lens. In person the paint looks great, aside from the aforementioned red patches on Thrust’s back which look disappointingly fuzzy.

Speaking of scale, the design would definitely work at a larger size, too – though perhaps that’s the Masterpiece fan in me speaking. Of course, on a larger bot the ball joints could probably not be relied upon in the same way, but when posing these alongside the Masterpiece conehead duo for the pictures I couldn’t help but think how good the fundamental design would be in, say, a Voyager size bot.

Above all else, the DX9 coneheads absolutely succeed in capturing the essence of all three characters. I can’t see how they could be recreated much better at this scale. When coupled with the main three seekers it’s going to be a hugely impressive set. This review may have a lot of words dedicated to the trio’s tiny niggles, but they are just that – niggles. DX9 has nailed the fundamentals incredibly well here, with no obvious compromises limiting either the bot or jet modes. And any figure that can do that is a winner. 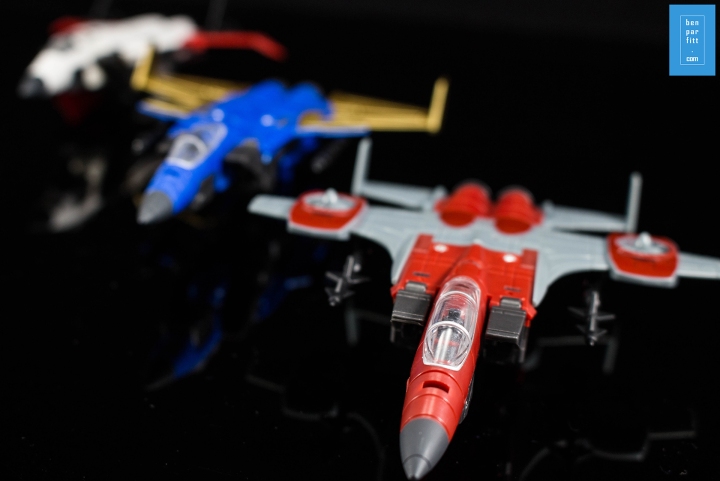 One comment I got a lot when I told folk I would be reviewing these was the hope that they would prove to be the tipping point that pushed me down the Legends scale collecting route. Has DX9 succeeded? No, I don’t think so. Honestly, it’s just not for me. Perhaps if I wasn’t already so far behind all the existing releases, maybe, but really I’m a Masterpiece guy at heart (with some select CHUG thrown in for good measure). None of which should in any way reflect negatively on the DX9 Coneheads, which have seriously impressed me. In fact, where Ultimate Commander fell way short, these guys completely deliver on the promises that fans of the scale have gleefully enthused about. Two great modes, a good transformation, highly posable and really solid – there’s not really much to fault here. I’m sure if Legends are your things, you’ll be completely delighted with them. Good price, too.

These figures were given to me by Kapow Toys for the purposes of this review. I was given unconditional editorial freedom. You can pre-order the DX9 Coneheads from Kapow here. My understanding is they’re due out any time now.

One thought on “REVIEW: DX9 War in Pocket Coneheads”