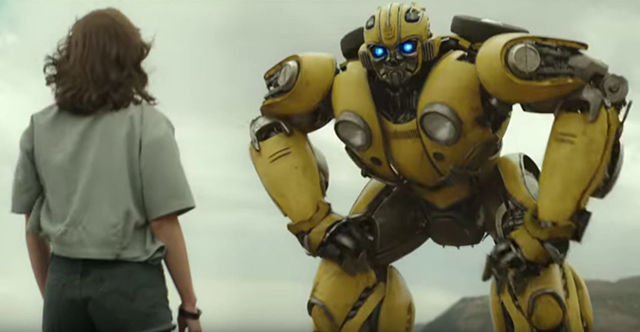 Lots of folks on my timeline are very excited about the new Bumblebee trailer this morning. I certainly concede that it doesn’t look very Bay, which is of course a wonderful thing. I also acknowledge that the robot design’s styling leans more towards G1 (he’s a Beetle!) than the wretched Bay aesthetic. At the same time, my relationship with the live-action Transformers movieverse is so deeply wounded after the horrors of the Bay movies that it will take more than a trailer for a new film looking less Bay-like for me to be able to assume any position of positivity.

At the very least the trailer suggests Bumblebee himself might not be a massive prick so hey, that’s good? There might even be some positive emotional relationships. And the bit where she touches his cheek? That’s nice. Admittedly it would be nicer if it wasn’t immediately followed by him being machine gunned in the back. And that Transformation still fills me with Bay-induced shudders. As does Starscream’s Bay face. And does the cinematography not feel really quite Bay-like to anyone else? The lighting and the panning shots and her very short shorts and shit?

But at the very least, if the film is just ‘nice’, that will be a start. And I like the score they’ve used, too.

Broadly speaking, when it comes to the Bayverse movies I think the Transformers fandom can be broken down into five different groups:

Yes, these people exist. There are people in this world who sit down to watch a Michael Bay Transformers film, enjoy the experience and upon its conclusion turn to their friends and say things such as “wow”, “that was great” and “I really liked that film”. In a timeline where people support Donald Trump, buy commemorative royal wedding plates, think Boris Johnson should be the next Prime Minister and equate feminism with Nazism, this still comes as a surprise.

These are fans who concede that the Bay films are flawed but dismiss criticism with the blanket defence of the films being ‘fun’. Fans like this often claim the Bay movies are enjoyable “as long as you don’t think about it too much and just accept them for what they are”.

This position also relies on the belief that action films are good only because they have action in them. Which is of course incorrect. The idea that they need not provoke mental engagement, or indeed pay any attention to filmcraft or be built around a moral core, is astonishingly wrong.

These are probably the same people who don’t vote because “all politicians are the same” and order margherita pizzas.

We’re now journeying toward the sane end of the scale. These are people who very much enjoy a tightly scripted and executed action sequence like you might find in John Wick, Kingsman, Fury Road or The Matrix. Essentially these people enjoy films that are well executed, but struggle with media that is below average quality. Life is short and time is limited, so squandering either on bad things is inherently displeasing.

These folks perhaps derive a kick from the Bay movies because Peter Cullen’s voice offers a pleasant nostalgic twang (though Optimus Prime being reduced to the role of murderous army general most probably does not), and seeing characters they have grown up with and love on the big screen still provides a slight thrill… even if said characters are essentially indistinguishable, sometimes have bollocks, are stripped of all positive characteristics and rendered largely hateful.

At last we arrive. The Bayverse films are not just ‘not OK’ – they are actively horrendous movies. Objectively, subjectively – I have not once heard a compelling counter argument.

Their action is overly chaotic, poorly scripted and visually unfulfilling (“wow – look at that metal bit of a robot hit that other metal bit of the other robot!”). The Transformers themselves are entirely unlikeable and without any endearing characteristics. The human characters are vacuous, and in the case of the women, violently objectified to the point of offensiveness. The plots are nonsensical and unrewarding and the running times are OBSCENE. There is not a single positive thing about these films. They are the absolute worst. And people complain about the Ghostbusters reboot ruining their childhoods!

And I can’t finish this without mentioned the ‘Romeo and Juliet Law’ scene from Age of Extinction. There’s only one thing Michael Bay likes more than ogling at worryingly young girls, and that’s using five shots when one would actually do. So the fact that the longest single static shot of the series (I think?) is dedicated to a scene where a character holds up a card he CARRIES AROUND WITH HIM that justifies his relationship WITH AN UNDERAGE GIRL through a LEGAL LOOPHOLE is both utterly fucking insane yet completely unsurprising.

This is perhaps the single worst scene in cinema and the absolute perfect encapsulation of why Bay’s movies are utterly indefensible.